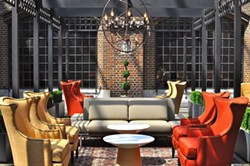 The Detroit Institute of Arts is launching a new, free series that will offer an in-depth look into contemporary art through conversations and panel discussions featuring key players in the scene. It's called "Which Side Up: What Moves Contemporary Art" and it's being presented by the Friends of Modern and Contemporary Art. It's set to start Sept. 21.

The first installment of the series, called "Unpacking the Concept," will feature Rebecca Hart, the museum's curator of contemporary art. She'll speak about the series as a whole and the topics for each program that will follow. It will be held inside the Kresge Court at 7 p.m. After that the series will be held once a month in various parts of the museum. Other speakers are set to include Michelle Grabner, co-curator of the 2014 Whitney Biennial; Kevin Beasley, a featured artist in the 2014 Whitney Biennial; Sarah Turner, dean of the Cranbrook Academy of Art; author Sarah Thornton; Vince Carducci, art critic and dean of undergraduate studies at the College for Creative Studies; and Alex Rotter, head of Sotheby's New York contemporary art department.

The program is free and open to the public, just another of the cultural amenities provided to metro Detroiters via the DIA.