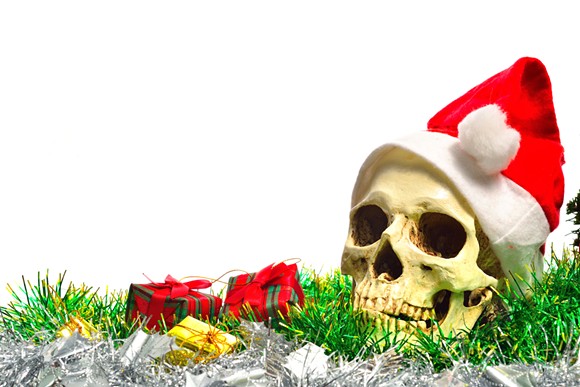 You've heard Charles Dickens' Christmas Carol, I assume. It's been made into countless films including a particularly spectacular version by Jim Henson and another that'd I'd like to rename Jim Carey's Christmas Carol.

Anyway, the tale is a classic one. A man spends his entire adult life in pursuit of wealth in which he derives no joy. He drives away his family, his friends, even the woman he loves. One Christmas Eve night he's visited by the ghost of his business partner who warns him that if he continues on this path, he's doomed to wander this physical plain, chained to his earthly possessions and invisible to all, for eternity.

Well, America, ya’ll could use a visit from Jacob Marley. We spend our days bombarded by messages about must-have products while idolizing the filthy rich. Yet, worshipping money and things hasn't made us happy. We're on more antidepressants than any other country in the world. In fact, one in 10 Americans take such medications.

Since that fettered spirit probably won't reveal himself to us anytime soon, it's important to remind one another what we can do to turn this old American wagon around.

First, now more than ever, it's important to support local businesses. Shy away from big chains that pay CEOs and other figureheads big bucks while store employees make less than a living wage. Often their products are produced overseas, as far away as China, where workers are paid pennies compared to what American laborers would demand. This might translate to lower costs for shoppers, but "cheap" applies to both the price tag and the quality.

Furthermore, let’s all remember that our president-elect is a money hungry narcissist who’s dedicated his life to amassing wealth no matter the cost. He’s proven time over time that he doesn’t care who he has to step on in order to reap a profit. He tricked people out of millions of dollars through his Trump University scam, and thus has agreed to pay a whopping $25 million to the people he screwed over, but only after being sued by the state of New York. He tricked 6,000 people to shell out cash for admission to the “university,” which promised to reveal his secrets to being successful in business. He’s also paying a cool $1 million for violating state education laws. His settlement allowed him to sidestep actually taking ownership of his crimes, despite parting ways with his precious dollar bills.

As for investing in American companies, Trump's signature Make America Great Again cap may or may not have been made in China.

For a list of places you can shop for Christmas gifts (or for anything really), you can click here. The list includes places like Glowfish Studios in Wyandotte, Well Done Goods in Eastern Market, Eldorado General Store in Corktown, Hugh in Midtown, and Handcrafted in Riverview. Locals run all of these businesses, many of who have saturated themselves in their community by being involved in organizations and events that support both their business and the people around them.

The benefits of spending your money locally are myriad and you can read about it here and here. Shopping locally benefits everything from the environment (whoa, what?) to the local economy (duh). You can look at a cool infographic about how shopping small has local and global effects. Plus, small businesses are responsible for creating two out of every three new jobs according to this 2010 report out of Michigan State University's Center for Community and Economic Development.

Think of small businesses in your community as the frail Tiny Tim (and yes, you're Ebenezer Scrooge in this scenario). Without concerted efforts made on your part, these business will fail and die. Instead of a crutch without an owner resting solemnly by the fireplace, there will be one more empty building on that city block.

While the “shop local” has been a rallying cry touted by major media organizations, food remains a challenging frontier when it comes to convincing people to seek local growers. Despite images of crop duster planes spraying fields with toxic chemical confetti, we’re still buying food grown in those fields.

Aside from being better for our health, supporting small local farmers and small-time growers can have a huge impact on both local economy and our global environment. Large-scale corporate farms employ practices that are both bad for our health and the environment.

According to this article from Alter Net, the farming game is sort of rigged here in America. It's slanted toward large corporate farms that capture tax money, “a system that financially benefits the intensive, large scale chemical farmers who are receiving misdirected agricultural subsidies and are not charged for the damage they cause to the environment and public health.”

Effects of these so-called “chemical-farming” practices aren’t immediately apparent to consumers, so they’re easy to ignore. Organic strawberries look identical to their non-organic counterparts, but they might cost almost double. And furthermore, they’re often sequestered to a small, far-off part of the produce section, segregated and sometimes hard to find.

Small farm workers also still aren’t paid state minimum wage and farm owners are allowed to pay them piece-rate, which means they can make as little as $4 an hour, sometimes even less.

Meanwhile both cost and waste is ballooning. Americans throw away nearly half their food (which amounts upwards of $165 billion — that’s billion with a b) while homeless and impoverished people go hungry. We're gluttonous and unsatisfied as a rule and hardly ever stop to think about less fortunate fellow Americans.

Remember the last ghost from the story? The dark specter that looked a lot like the Grim Reaper? He afforded Scrooge a vision of what the future would look like if he continued in on his wicked path.

Well, we're about to meet that ghost, but he's coming in a different form. We'll call him the Ghost of President Trump.