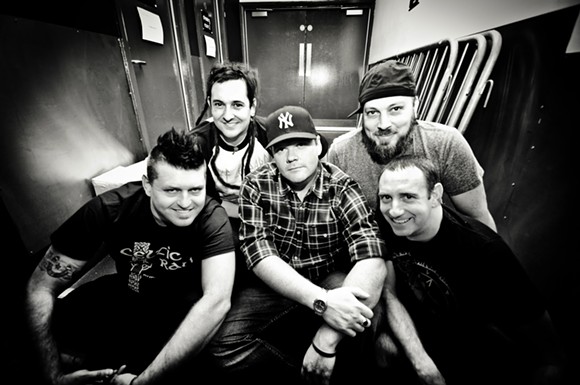 Thursday, 2/9
Pepper, Less Than Jake
@ Majestic Theatre
Pepper has been around since 1997, and has released seven pretty awesome alternative rock/ska albums in that time span. Since the Hawaiian band moved to the mainland, they’ve had a pretty spectacular career, and most people have probably heard them without recognizing them, since the band has been featured in Forgetting Sarah Marshall, Good Luck Chuck, and some video game soundtracks. Their latest release, 2010’s Stitches EP, followed a two-year hiatus that brought a fantastic growth in songwriting to the EP.
Doors open at 6 p.m.; 4120 Woodward Ave., Detroit; majesticdetroit.com; Tickets are $25 in advance and $30 the day of.

Friday, 2/10
Dirty Heads
@ The Fillmore
From sunny California, the Dirty Heads are bringing their reggae fusion across the country. They’ve performed with O.A.R., Pepper, Kottonmouth Kings, and more. Since their inception in 2006 by Jared “Dirty J” Watson and Dustin “Duddy B” Bushnell, they’ve released five albums. Their major influences include Sublime and the Beastie Boys, but it’s all with their own twist on the alternative hip-hop/reggae genre. This show, presented by Cal & Co from 89X, is sure to rock.
Doors open at 7 p.m.; 2115 Woodward Ave., Detroit; thefillmoredetroit.com; Tickets are $8.90-$70. 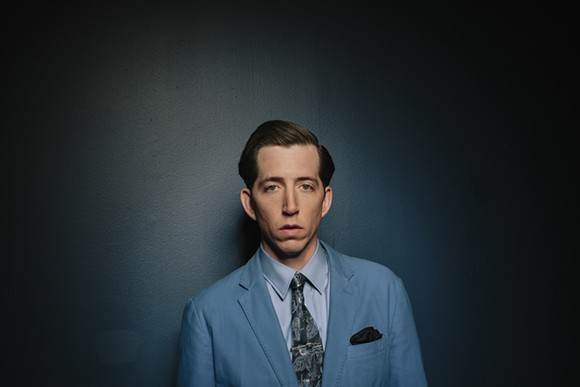 Friday, 2/10
Pokey LaFarge
@ The Ark
Pokey LaFarge, born Andrew Heissler, grew up in Illinois immersing himself in Civil War and World War II history, and through his love of history, he developed an affinity for classic jazz and blues. After figuring out his way around guitars and mandolins, LaFarge developed his own modern brand of blues, jazz, and Western swing. His music is refreshingly current while classic at its heart. Seeing him life is sure to be a treat to all fans of the genre.
Doors open at 7:30 p.m.; 316 S. Main St., Ann Arbor; theark.org; Tickets are sold out, but available through resellers.

Friday, 2/10
Perlon night
@ Marble Bar
Sammy Dee first made his name known in his hometown of Berlin, where he began experimenting as a DJ. He’s considered a veteran of the electronic scene because he’s been with it for so long, but he’s as active and innovative as ever. Keith Kemp, a Detroiter, found inspiration from Skinny Puppy and Brian Eno in his youth, and from that point forward, he began to make experimental, technical electronic music. Kemp has focused not just on DJing, but on other aspects of electronic music as well, like manipulating computers, samplers, and synths.
Doors open at 9 p.m.; 1501 Holden St., Detroit; facebook.com/marblebar; Tickets are $10 in advance. 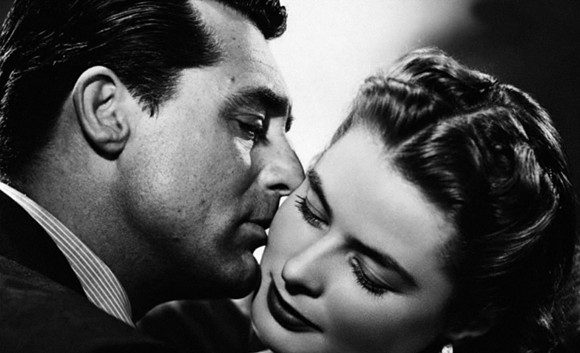 Fri-Sat, 2/10-11
Cary Grant tribute weekend
@ Redford Theatre
Cary Grant was actually born Archibald Alexander Leach, which is kind of hard to believe because that name is so awful it has to be made up. Quite in the fashion of Old Hollywood, he changed his name to make himself more appealing to directors and moviegoers. Grant, who is widely accepted as one of the greatest leading men of all time, starred in films like Bringing Up Baby, Only Angels Have Wings, His Girl Friday, The Philidelphia Story, North by Northwest, and An Affair to Remember. Some of his greatest works (along with his greatest co-stars, Audrey Hepburn and Ingrid Bergman included) will be shown this weekend and the historic Redford Theatre.
Arsenic and Old Lace starts at 8 p.m. on Friday night, Charade starts at 2 p.m. on Saturday, Notorious starts at 8 p.m. on Saturday; 17360 Lahser Rd., Detroit; 313-537-2560; redfordtheatre.com; tickets are $5 to all showings.

Fri-Sat, 2/10-11
VLNTNSDYMRKT 5
@ Jam Handy
If you’re looking for some locally made goods for your betrothed this Valentine’s Day, we encourage you to check out our guide of funny gifts as well as the VLNTNSDAYMRKT put on by Pot and Box. The event, now in its fifth year, invites local crafters and vendors to shill their wares in honor of the day of love. You’ll find creations by JKM Candles, Tree Trunk Arts, Rebel Nell, Dave’s Sweet Tooth, Stef-N-Ty, Jody Lynn’s Emporium of Doodles, Sfumato Fragrances, Drifter Coffee, and many more. And yes, of course, there will be a Lularoe vendor there too.
Runs 6-10 p.m. on Friday night and 10 a.m.- 6 p.m. on Saturday; 2900 E. Grand Blvd., Detroit; potandbox.com.

Saturday, 2/11
Dead Again
@ Otus Supply
Dead Again is easily the best Grateful Dead cover band around. Their shows are coveted and sell out fast because Deadheads take this stuff seriously. The good news is, if you can’t score a ticket to this show and you just have to pay your respects to Jerry Garcia and the gang, there’s always the band’s annual 4/20 show. So, go find a tie-dye shirt and maybe some sort of fringed leather accessory, and find a ticket to this show as quickly as you can.
Doors open at 8 p.m.; 345 E. Nine Mile Rd., Ferndale; facebook.com/otussupply; Tickets are $12.

Saturday, 2/11
Black Tiger Sex Machine
@ Saint Andrews Hall
If you like how Daft Punk wears those masks while making your booty move around, then you’ll love Black Tiger Sex Machine. The Canadian electronic trio dons tiger masks fitted with LED lights that is synced to their music during performances. The group, which has been active since 2011, has performed at Lollapalooza, SXSW, Electric Forest, and more. They’ve brought their aggressive electro house to the world, and they’ve released 10 albums that have brought them a considerable amount of critical acclaim. 2016’s Welcome to Our Church didn’t disappoint, and fans will want to hear it live. Their last show in Detroit, at Populux, sold out pretty quickly. So those who want to go see the animalistic electronic trio live should make their plans soon.
Doors open at 8 p.m.; 431 E. Congress St., Detroit; saintandrewsdetroit.com; Tickets are $20. Saturday, 2/11
Cupid’s Undie Run
@ The Fillmore
If you have an exhibitionist streak and also enjoy raising money to benefit scientific research that could cure deadly childhood diseases, then Cupid’s Undie Run is the perfect marriage of your interests. The not-quite-a-mile dash has runners sprinting through the cold February air wearing nothing more than boxer briefs and sports bras. While the quick race around Foxtown is the event’s headliner, a before-and-after party also takes place at the Fillmore. The party/run raises money for the Children’s Tumor Foundation and research for neurofibromatosis. The run, which takes place in several cities across the country, raised $3.5 million for their cause just last year.
Starts at noon; 2115 Woodward Ave., Detroit; cupidsundierun.org; tickets are $25-$55. 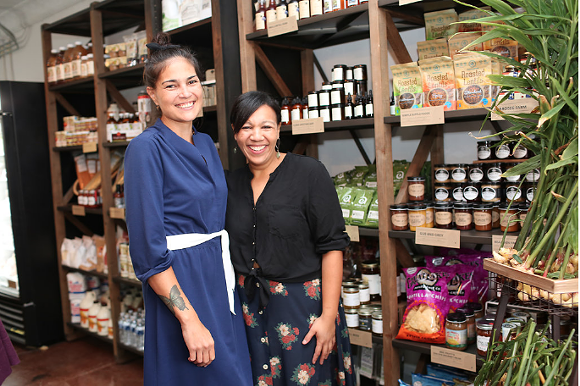 Saturday, 2/11
Adam Devine
@ The Fillmore
Our favorite Adam Devine role might be his spin as Bumper Allen in the widely popular if not unduly praised Pitch Perfect series. The narcissistic a cappella singer falls for the portly but hilarious Fat Amy, but our editor notes that we would be remiss to not mention his role on Comedy Central’s Workaholics, which our readers apparently care more about tha musical dramedy hybrids. Either way, the young comedian will be performing his “Weird Life” tour at the Fillmore this weekend.
Doors open at 8 p.m.; 2115 Woodward Ave., Detroit; 313-961-5451; thefillmoredetroit.com; tickets are $35.

Sunday, 2/12
Dilla Youth Day
@ The Charles H. Wright Museum
Now in its sixth year, Dilla Youth Day continues to expand its participatory programming to be ever more diverse and fun. The event, named of course for the pioneering Detroit hip-hop artist J Dilla, is a celebration of aesthetic and technological innovation and invention in Detroit. Hands-on workshops, jaw-dropping performances, informative lectures, and the best music you will hear anywhere near the city today — it’s all on hand.
Starts at noon; 315 E. Warren, Detroit; 313-494-5800; admission is free.

Tuesday, 2/14
Valentine’s Day Circus
@ Flyhouse Detroit, The Eastern
Anyone who has ever seen the Flyhouse players perform know that plenty of aerial acrobatics, fire-dancing, stilt-walking, juggling, and more are in store. The troupe have two Valentine’s Day shows planned: a family-friendly version at 6 p.m., and an adult (18 and older only) version at 8:15 p.m. This show usually sells out, so get your tickets ahead of time.
Shows at 6 p.m. and 8:15 p.m.; doors open 30 minutes before show; 3434 Russell St., Detroit, Ste. 208; detroitcircus.info; tickets are $10 for adults and $5 for children for the 6 p.m. show, and $15 for the 8:15 p.m. show.

Tuesday, 2/14
Aaron Carter
@ The Loving Touch
He beat Shaq at basketball and he banged Hillary Duff, so you can’t be too mad at Nick Carter’s little bro for continuing his quest to do the damn thing. And let’s be honest, if there were no Aaron Carter, there would be no Justin Beiber, and that’s just not a world we want to live in (we’ve admitted it, it’s fine). He’s got a new album called Love due out on Feb. 10 (for real) and is hitting the stage at The Loving Touch on Valentine’s Day for what’s sure to be either the most depressing or most entertaining thing to ever happen to you.
Doors open at 8 p.m.; 22634 Woodward Ave., Ferndale; 248-820-5596; thelovingtouchferndale.com; tickets are $17-$50.

Tuesday, 2/14
Casablanca
@ Max M. Fisher Music Center
Here’s looking at you kid! This special screening of the 1942 classic features Max Steiner’s Oscar-nominated score played live by the Detroit Symphony Orchestra, adding an extra dramatic dimension. There’s a reason Casablanca is a gem. Valentine’s Day packages include Champagne, chocolate truffles, a long-stem rose, and a three-course menu. Whether you know the film by heart or haven’t seen it yet but are aware of its cinematic legacy, this screening is sure to be memorable.
Starts at 7:30 p.m.; 3711 Woodward Ave., Detroit; 313.576.5111; dso.org; tickets are $35-$100.

Wednesday, 2/15
Michigan-made wine tasting
@ The Farmer’s Hand
The Farmer’s Hand is arguably the coolest place in Corktown right now, so make it a point to hit this special special wine tasting on Wednesday if only to grant yourself the right to brag to your friends that you’ve visited the Michigan-made, lady-owned shop. Guests will get to sample four Michigan-made wines and hear the super important testimony of Brengman Brothers owner Robert Brengman and wine writer David Furer. There will also be cheese.
Starts at 6 p.m.; 1701 Trumbull St., Detroit; 313-377-8262;
thefarmershand.com; tickets are $10.

Wednesday, 2/15
Craig Brown Band
@ UFO Factory
Craig Brown has been around in Detroit for years now, starting with his time in the punk band, Terrible Twos. In a solo departure from that band is Craig Brown Band, a country-rock band chock-full of honky tonk twang. The band’s first album, The Lucky Ones Forget, was produced by Warren Defever (Thurston Moore, Iggy and the Stooges). The rest of the band, Eric Allen, Jeff Perry, Andrew Hecker, Caitlyn Drinkard, and Bonnie Drinkard, all provide their unique talents, making sure to keep the hillbilly sound of the group polished and tuned in nature. Their single release show at UFO Factory is going to be excellent, and they’ll be joined by Birdcloud, a Tennessean duo whose lyrics alone will definitely win over your heart.
Doors open at 9 p.m.; 2110 Trumbull St., Detroit; ufofactory.com; Tickets are $10.