I'm sure you've all read by now that Lindsay Lohan has been busted for DUI and possession of cocaine in , only days after appearing in court on another DUI charge and having the judge order one of those ankle bracelets that supposedly can sense if someone is using or not. I believe this was something like her third bust in three months. Stupid bitch. This is an everyday occurrence in , by the way. I was regularly almost run off the road by young socialites/Paris Hilton wannabes on their cellphones and messed up to the max. What? Lohan can't afford a fucking driver? Makes me glad to be out of that crazy place. Everything was Paris Hilton to the point of absurdity right before I left. I really thought her "cry baby" routine would result in the end of her career... but I guess I was wrong. Nevertheless, in the interest of public service, I thought I'd post this photo essay (which I posted awhile back on another music site several months ago), just to illustrate -- at least when it comes to defiance and busts:

THE DECLINE OF POPULAR CULTURE, PART 1: 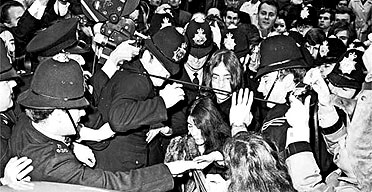 Elvis in court on assault charges, 1956