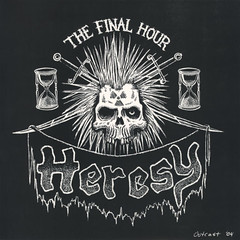 It only took like a million years, but the punks of Detroit's Heresy finally have a worthy vinyl release in The Final Hour EP. The band, led by Tim King, played in the 1980s at clubs like Graystone Hall or the storied Hungry Brain. And the 7-inch release, on green vinyl, with a mushroom cloud on one side and a group "moon shot" on the other (guess where the turntable hole appears), earns every right to be placed on your 1980s turntable with the heavy arm. Released this spring, the run of 500 numbered copies may even already be exhausted.

What was the band like? Heresy specialized in a liberty-spikes-and-all brand of speedy street punk that took its style cues from British punk bands like G.B.H and Discharge, a sound that flirted with metal before Discharge just finally began sounding like Sabbath. The anti-religion, anti-war themes recur in the album's tracks, which include "Final Hour," "Holy War" and the thermonuclear hangover of "Morning After."

As for the album, the person responsible is Pub Life's Jason Outcast. A source close to the project says the old Heresy tapes were in such bad shape that the sound heads had to be cleaned of rust more than once during the tape transfer, so sound quality may be less than hi-fi. But the disc itself includes a lovingly written mini-history of the band, reproduced fliers, and photos galore, including a cool snapshot of the band posing in front of the long-gone Del Ray eatery Joey's Stables.

And, speaking of photos, we can't help but notice that the band nicked the shot of Tim King screaming from our paper. That's right, somebody cut the photo right out of our paper and used it on the back cover. Without permission or credit. Now that is punk rock! 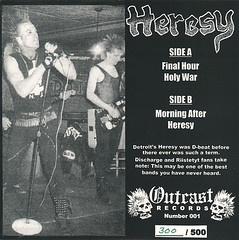