KRAMER TO RAGE AT THE DNC...

Well, y’all must know that the Democratic National Convention kicks off in Denver this coming Monday, August 25th — and, hopefully, it’ll be the one that gives us our next president

although after Bush, I’d vote for Spot the Fucking Wonder Dog before I’d vote for John “Hey, I defended Charles Keating and I don’t know how many homes I own” McCain. It took everything I had not to run over the idiot on 14 Mile and John R. who was holding the “Abortion is the American Holocaust!” and “Vote McCain ‘08” the other day ‘cause you just know he’s one of those dudes who believes that it doesn’t matter how many people have been killed and maimed in Iraq just so long as “the fags” can’t get married and women don’t have control over their own bodies

Oy! And I’m not even Jewish

What you may or may not know about (or maybe not even care about) is that history is kinda repeating itself twice in Denver next week, as Rage Against the Machine has joined forces with the Iraq Veterans Against the War and Tent State University to perform as part of the “Tent State Music Festival to End the War” on Wednesday, August 27th, at the Denver Coliseum. The band will join the Flobots, the Coup, State Radio and former Detroiter and MC5 guitarist Wayne Kramer.

Don’t know about you but I always found Rage Against The Machine’s music pretty insufferable (although Tom Morello is a fantastic guitarist when he has some decent music to play). It’s lead singer Zack De La Rocha, though, that brings the insufferable description to this particular band. I remember them playing a KROQ Christmas show in L.A. many years ago. Even Perry Farrell and the Violent Femmes performed Xmas songs to get in the festive spirit of the event that night. De La Rocha, on the other hand, got onstage and started babbling about Santa Claus being a “big fat white man” and a tool of the imperialist corporate industrial Man who’s trying to keep us all down

.to the point that even some of their fans started yelling: “Shut the fuck up and play!” The obvious question was if you have such a hard time with Christmas, then why the fuck did you agree to play a Christmas show, fer Crissakes? Besides, I’ve always had a hard time with Che Guevara T-shirt wearing “revolutionaries” who record and receive advances from huge Japanese multi-corporations. But whatever

At any rate, history is repeating itself because RATM played outside the Staples Center in L.A. during the 2000 DNC which led to a full-scale riot, complete with tear gas and the whole caboodle. Kramer was also there, though he didn’t end up playing. I wasn’t there — I don’t like Rage Against The Machine — but some of my friends were and they said it was terrifying. History is also repeating itself in the sense that Kramer, along with the MC5, playing in the park during the infamous Chicago Democratic Convention in 1968. That one led to an even bigger riot, with people getting their heads busted wide open and the whole thing. Some speculate that it even led to Nixon (who strangely looks “good” these days compared to the moron who’s run the country for the past eight years) winning the election with his law & order and silent majority platforms. So you could say — sarcastically, of course — that those last two appearances worked out rather well.

Kramer recently reflected in Denver’s Rocky Mountain News: “That [the 2000 DNC in L.A.] was a pretty surreal moment for me. Rage Against The Machine opened their set with ‘Kick Out The Jams,’ a song I wrote with the MC5. You can't anticipate moments like that

I saw the LAPD forming up. They looked like cyborgs from a Star Wars motion picture — the high-tech shoulder pads, the face screens, all the boots. Listen, this is Hollywood. We do it up right here. They looked like cartoon movie characters, except this wasn't a joke. The wisest thing to do was to get away from them. I got home and watched it on TV.”

Which makes one wonder: Why don’t they play the Republican National Convention, instead, and disrupt that one? Actually, it looks like RATM is planning to do a show at the RNC as well

though one ultimately wonders what the point is

Hey, I’m all for ending the war and protesting but isn’t this sort of preaching to the converted? Oh, well, Kramer did tell the newspaper: “I have very high hopes for Denver. I'd like to think that in America, people can come and express their views, and they can be dissenting views. That you can make some noise and not be arrested and beaten for it. I'm going to Denver with peace on my mind and cooperation and justice in my heart - and a song on my lips.”

But, hell, if you’re going to be in Denver next week, tickets for the show are free and available by lottery. Interested parties can sign up for the lottery, with a valid photo ID (that person must be present), at Tent State University at Cuernavaca Park between 11 a.m. and 6:30 p.m. (look for the Tent State Music Festival booth near the IVAW Tower) Sunday, August 24th through Tuesday, August 26th. Winners (two tickets apiece) will be notified by email Tuesday evening, August 26. (Yeah, it sounds like that should run smoothly

Hey, I always kinda liked the Coup, though

Go to www.tentstate.org for more info. 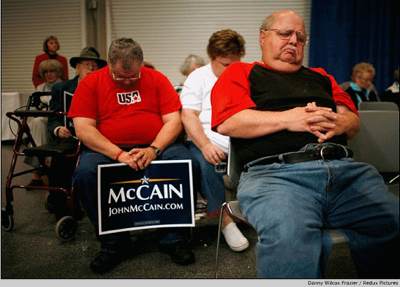 And don’t forget the Republican National Convention is coming soon