Just catching up on a few items on a Friday afternoon follwing an incredibly busy work week:

*Got an e-mail from our friend Zach Curd earlier this week, alerting us to the fact that he's about to release, on vinyl, a new electronic/dance music collaboration between himself and Keith Thompson from Electric Six and Johnny Headband. Suburban Sprawl is putting out the 3-song 12-inch on September 29th, but the whole thing is already available for free download online by clicking here. Awesome stuff!

*Travis Wright alerted me yesterday to the fact that if you buy the new Silent Years CD on iTunes, you get a bonus track — "Vampires Bite the Hands Feed Them" that's been remixed by the excellent Deastro (aka Randy Chabot) himself.

*We posted earlier this week about the upcoming KISS show at Cobo Hall (the site where KISS Alive was recorded). To add confusion to things, we just learned that original KISS guitarist Ace Frehley will be appearing at Cobo Arena on Saturday, Sept. 19th to sign copies of his new release, Anomaly. The appearance is to give fans "one last chance to stand on Cobo's stage." While in D-town, Frehley will also be interviewed for a new documentary, Live At Cobo, which is being made by sometime MT contributor Eric Harabadian, among others. More details on that later. Ace's signing will start at 1 p.m. and copies of his album will be on site for purchase.

*Speaking of classic Cobo Hall shows -- no, it's not Bob Seger & The Silver Bullet Band but an amazing simulation (at least according to their press releases). Lookin' Back, Southeast Michigan's first-ever Bob Seger & The Silver Bullet tribute band, has spent the past eight months recruiting members and putting their act together. The band will present its debut performance next Saturday, Aug. 29th, at the club New York New York, 33151 23 Mile Rd., Chesterfield Twp, MI 48047; 586-725-3914. Doors are at 8 p.m.; music starts at 9:30; $10 cover. Go to www.TributeToSeger.com for more info on the new band.

*A local Michigan company is offering $50 off its new Livio Radio in exchange for old stereo and audio equipment, which will then be reused or recycled in accordance with local recycling programs. The Livio Radio is an affordable and easy way to enjoy Pandora Internet Radio independent of a computer. You'll also get a free T-shirt.with the purchase and trade-in. The Livio Radio Trade-In Program is going on for the month of August only (Monday through Friday from 10 a.m. to 4 p.m.) at the Livio offices in Ferndale; 136 Hilton, Ferndale, MI 48220. You can find out more at www.recyclemyradio.com.

*The Motown Records family took another hit last week when prolific Motown arranger, composer, orchestrator Dave Van DePitte passed away at the age of 67. The 30-year member of the Detroit Federation of Musicians, Local 5, had a huge discography, including many Grammy-winning hits that continue to be played every hour on the hour on radio stations throughout the world. Our condolences to his family and friends.

*Finally, closer to home, we were incredibly saddened to hear of the death yesterday of Mike Stefanski of the local band, Love Meets Lust. Stefanski was the keyboardist and songwriter for the popular four-member electro/new wave/rock ’n’ roll unit. The group played MT's 11th annual Blowout year only three months after forming and followed that up by selling out the Belmont a week later. The band also released a debut album, Bitter Company, and followed that up with a successful two-week tour of the West Coast. They also headlined a well-received show at Blowout 12. Our condolences to his family, his bandmates and all his friends. 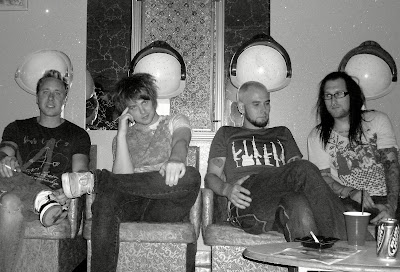