STOOGES FINALLY IN HALL OF FAME...

The Stooges will finally be inducted into the Rock and Roll Hall of Fame at the 25th annual ceremony on March 15th at the Waldorf Astoria in NYC. It's about freaking time...although it took so long for this to happen, it's almost anticlimactic at this point. Nevertheless, the good news is that we'll probably get a nice sneak preview of how the reunited Iggy & The Stooges (with James Williamson) sound live when the show is finally aired on TV.

In our exclusive interviews with Iggy and Williamson earlier this year, Pop said about the nomination: "It's one of those things. [laughs] It comes up to remind me; "Oh, the holidays are coming." [laughs] I really never think about it until someone says, "You were nominated." Again? I try to just...you know, it's none of my business. It's their thing and it's nice to be nominated for anything." It's a much more diplomatic Igster these days than the one who told me years ago that maybe he'd get in if he titled one of his albums "Fucking Heroic Young Record Executive or something like that!"

The other inductees are a little on the weak side, with the possible exception of the Hollies. The other three inductees are Genesis, ABBA and Jummy Cliff. Anyone who's been listening to holiday music on the radio this week and happened to hear Darlene Love's eternally great "Christmas (Baby, Please Come Home)" might be outraged that she wasn't inducted after being nominated this year...but the bright side here is that neither the repugnant Red Hot Chili Peppers or KISS made the cut, either. You know Gene Simmons is just frothing at the mouth about it today...but if either of those bands go in before the MC5, Mitch Ryder, the New York Dolls, Alice Cooper...well, hell, if that happens, they may as well shut the place down. That's how much credibility it will still have.

Also inducted in the non-performer categories are executive David Geffen and a bunch of songwriters -- Barry Mann & Cynthia Weil, Ellie Greenwich (who passed away earlier this year) & Jeff Barry, Jesse Stone, Mort Shuman and the great Otis Blackwell (I mean, it took till 2009 to induct the man who composed "Don't Be Cruel," "Great Balls of Fire," "Fever," etc., etc., etc.??)

Anyway, congrats to Iggy, Williamson, Scott, the late Ron Asheton (who was the one in the band who really wanted this, it's been said) and Dave Alexander, Mike Watt and everyone involved in making this band one of Detroit's proudest musical exports. 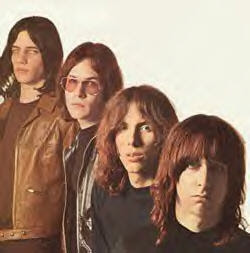 Congratulations, dudes. You're in the Hall of Fame....