Here's a peek inside Populux, the new dance club that used to be the Magic Stick

Fans of the Detroit music venue the Magic Stick will scarcely recognize its new incarnation as the dance club Populux, which opened to the public over the weekend. The venue saw a soft opening for friends and family on Friday, and a public, sold-out launch on Saturday with sets by Derrick Carter and DJ Sneak.

Though the neon "Magic Stick" sign was still lit outside, changes are apparent before even setting foot inside the club — from the thumping house music pumped onto the Alley Deck, to the stairway, once decorated salon-style with gig posters, which have now been moved to the Majestic Cafe.

And upstairs, what used to be a dingy former pool hall is now a sleek, glowing dance floor. For a reminder, here's what the Magic Stick used to look like: 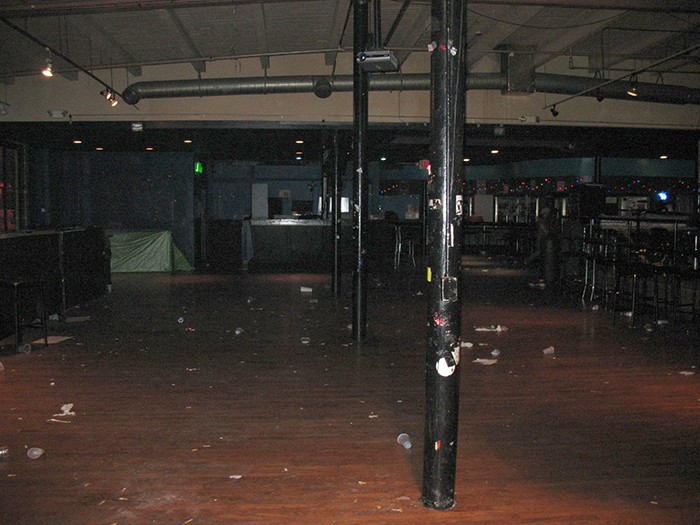 But the most obvious and eye-catching change are the six synchronized color-changing LED-lit columns built around the beams in the middle of the dance floor.

The only really recognizable shape in the room is the main bar (though the many band stickers that covered it have all been removed). A partition that once divided the room in two has been removed, vastly increasing the size of the dance floor as well as allowing the stage to stretch across the whole end of the room. Other additions include two smaller bars, which flank the dance floor, as well as a velvet rope VIP booth.

Smoking seems to be permitted on the Alley Deck again, based on ashtrays that were left out (it was banned last year after a flicked cigarette butt nearly caused a fire above the Garden Bowl below).

Clearly owner Amir Daiza's rebranding effort is backed up with dramatic changes to the space. But it should be noted that while the club's itinerary so far reveals a much more focused techno and house-oriented set, there are a diversity of sounds, too. Other booked acts in the near future include Dan Deacon (who previously played at the Magic Stick) as well as Toro Y Moi, whose latest release is more guitar-driven.

Read our talk with Daiza here, or peruse a slideshow of 48 photos from the Populux grand opening.