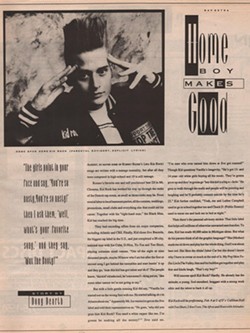 In case you haven't read it yet, stop what you're doing and head over to the Free Press, where you'll find the deep-dive into the Kid Rock origin story you didn't even know you needed.

The article — titled "Kid Rock before the fame: The definitive Detroit oral history" — was posted earlier this morning in advance of Rock's 10-gig homecoming run at DTE Energy Music Theatre, which kicks off this week.

Even if you think the guy's a boob [*cough*], it's an entertaining and fascinating look at Rock's scrappy beginnings, and the nascent scene that that would launch the careers of Rock, Eminem, and Insane Clown Posse — who would all later break nationally and become major forces to be reckoned with in pop music.

Head over to the Free Press to read the whole story.