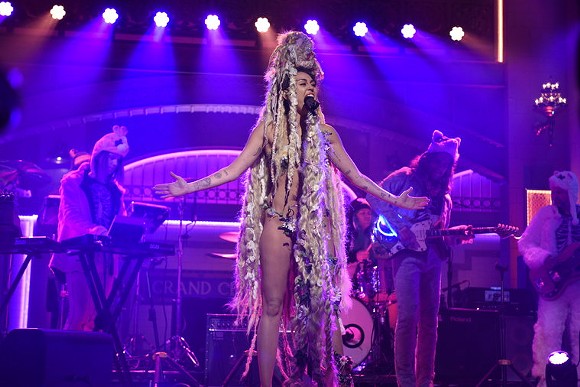 Following her performance as both host and musical guest for the season premiere of Saturday Night Live this weekend, pop singer Miley Cyrus announced a short tour with her new backing band, Her Dead Petz (who are actually indie-rock vets the Flaming Lips).

The five-city tour begins Nov. 19 at Chicago’s Riviera Theatre, including a Saturday, Nov. 21 stop at the Fillmore Detroit. Tickets go on sale Oct. 7 at 4 p.m. at ticketmaster.com.

You could say it's a bit of a homecoming for Cyrus. Maybe. Kinda. Cyrus, you might recall, told Rolling Stone in 2013 "Detroit's where I felt like I really grew up" — in reference to the time she spent here filming a forgettable movie called LOL in 2010:

"It was only for a summer, but that's where I started going to clubs, where I got my first tattoo. Well, not my first tattoo, but my first without my mom's consent. I got it on Eight Mile! I lied to the guy and told him I was 18. I got a heart on my finger and wore a Band-Aid for two months so my mom wouldn't find out."


(Our friend swears he went to a party in Woodbridge at the time where Cyrus was in attendance. Who knows.)

Anyway, watch the (super?)group perform "Karen Don't Be Sad" on SNL below: