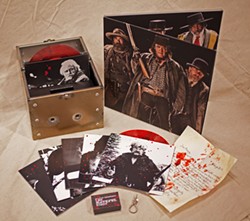 For the soundrack for his latest film, The Hateful Eight, director Quentin Tarantino tapped classic composer Ennio Morricone to compose an original score, eschewing his typical approach for wide-ranging musical pastiche. Well, for the most part, at least — the film still contains quite possibly the weirdest use of a White Stripes song since Napoleon Dynamite.

But we're sure it's more than just the White Stripes connection that led to Jack White's Third Man Records securing the vinyl release of the Golden Globe-winning soundtrack. Like White, Tarantino has an affection for all things retro and weird: The Hateful Eight originally screened as a 70mm print as part of an old-fashioned limited run roadshow. So it only makes sense that for the vinyl release, Third Man is pulling out all the stops.

They're selling the soundtrack as both a standard 180-gram double-LP as well as a limited edition 7-inch box set on "blood red" vinyl. The box set features a number of hand-made touches, ranging from the impressive (like a galvanized steel carrying case with real bullet holes) to the bizarre (a metal noose pin and a replica of the film's blood-soaked letter from Abe Lincoln).

Fans can pick up the box set — which was limited to a release of 500 — from Third Man Records Cass Corridor in Detroit on Jan. 25.

Watch a video showing off the box set below: