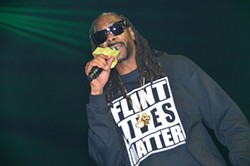 According to a source for Michigan news, the emcee sat down to discuss ways he could assist in water relief efforts and chronicled it all on Twitter.

"He wanted to get a thorough understanding about how long this has been going on and what's been happening," Weaver said.


Many celebrities without direct ties to Flint have pledged aid and assisted in efforts ranging from the tangible (delivering water, benefit concerts) to the questionable (cough, cough, Michael Keaton, cough, cough), and Calvin Broadus Jr. (Snoop) made an excellent point, according to Weaver.

She stated, "Somebody said, 'Well, you don't have any ties to Flint, what made you come here?' He said, 'We do have ties, we're people.'"

Snoop's a little closer than six degrees, though. On hand at the meetup was Dr. Dre's latest Michigan protégé Flint native Jon Connor, who released the song "Fresh Water for Flint" this past week, which you can check out below.

Connor lived in Flint until a couple of years ago and told XXL, "I’m just trying to make all the dots connect of people I know in the industry who’ve reached out to me."