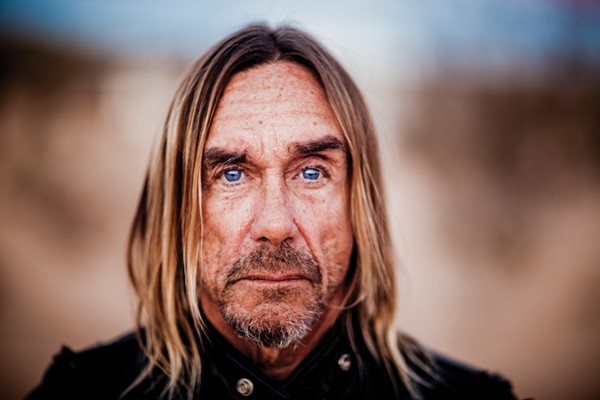 As local fans of Iggy Pop know, the Godfather of Punk is coming back to town, hot on the heels of his supergroup's release Post Pop Depression. But the live show isn't the only byproduct of that album. Images from the LP's photo shoot will be displayed at the Museum of Contemporary Art Detroit. The first look will be available to those holding tickets to the VIP party right after the show at the Fillmore, and Pop and his band will be there.

Most of the shots were taken by adman-turned-photographer Andreas "Dre" Neumann, and the location they're set in couldn't be more iconic in rock history: the Joshua Tree National Park in the Mojave Desert, where Josh Homme's studio is. When we spoke with Neumann last week, he says he loved getting the assignment to photograph somebody he considered iconic, as Pop's music was "up and down the radio" in the Germany of his youth.

Neumann says his photos show "a man who has seen it all." Neumann says: "I think it is the best time to photograph him."

The exhibition will showcase about two dozen images in all, and will also include a handful of images shot by drummer Matt Helders.

The VIP opening will immediately follow the April 7 Iggy Pop concert at the Fox Theatre. It will take place at MOCAD, 4454 Woodward Ave., Detroit; 313-832-6622; tickets are $40 and are available at mocadetroit.org. The exhibit will be on view to the public during regular museum hours April 8.