Show review: Iron Maiden at The Palace of Auburn Hills 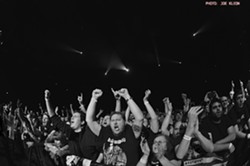 A metallic powerhouse that's reigned supreme in the world of heavy metal for more than 30 years, played more than 2,000 shows and delivered worldwide sales of 90 million records, Iron Maiden could easily rest on its laurels and do the obligatory "greatest hits tour." However, they would rather do the opposite. Their latest release, 2015’s Book Of Souls, is the most featured album on this current tour, comprising six of the night’s fifteen tracks.

Touching down on Tuesday night in Auburn Hills, this tour finds the band sounding as good and energized as ever, despite singer Bruce Dickinson’s recent health issues. Dickinson was the usual manic madman on stage. Few vocalists command the front position like he does. His voice sounded strong and dynamic.

The three-guitar force of Dave Murray, Adrian Smith, and Janick Gers produced such a wall of sound that the the triple guitar attack sometimes overpowered the bass and drums. The frantic but precise bass mastery of Steve Harris and the wickedly talented and tasteful

percussion of Nicko McBrain add a rhythm section unparalleled in the metallic world.

Visually, this tour features many metallic trappings. Smoldering cauldrons, plenty of pyro, pyramids, dry ice, multiple appearances from Eddie, and a band that musically is still at the very top of the hard rock and metal genre.

While the six songs featured from Book Of Souls are well written and were nicely executed live, it's the classic tracks that raise the energy level at The Palace of Auburn Hills to a boiling point. “Children Of the Damned,” “The Trooper,” “Powerslave,” Hallowed Be Thy Name,” The Number of the Beast,” and the band’s signature track had the audience on its feet, screaming the words and loving every second. Some say a band is only as good as its last gig. If this is true, Iron Maiden is as good as it's ever been.