WYCD is taking the downtown out of their annual Downtown Hoedown. For 33 years, the Downtown Hoedown brought country music fans from around the region to downtown Detroit for a multi-day showcase of national and local country music artists. Until 2011, when it left Hart Plaza and became a ticketed event, it was widely referred to as the largest free country festival in the world.

But for 2016, the Hoedown is heading to Clarkston.

DTE Energy Music Theatre will host this year's event, a scaled-down, one-day music festival headlined by Brad Paisley. Multiple stages will allow organizers to replicate a little of the familiar festival vibe, which will feature 20 bands, but fan reaction to the much-anticipated annual announcement was less than enthusiastic. 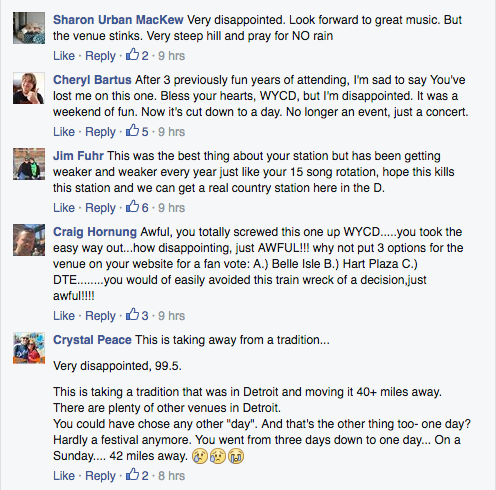 Festival organizers spent practically all day defending their decision on Facebook and issued an 'official statement' citing their goal of 'building a better Hoedown.'

That may be, but it remains to be seen if fans will come out for an event that feels much more like just another concert than the downtown party that the Hoedown has always been.