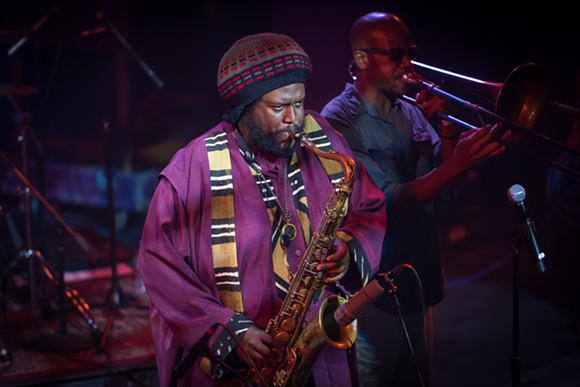 The 2016-17 UMS season lineup was just announced, and it's quite a doozy. The upcoming University of Michigan performing arts season features 62 live performances by 39 different artists and ensembles. There's a full Beethoven "String Quartet Cycle" performed by the Takács Quartet, and a bunch of innovative performance in any possible way that people perform — music, theater, dance, and various interminglings of the above.

Tickets to individual events will go on sale to the general public online, in person, and by phone on Monday, August 15. To be added to the mailing list, please contact the UMS Ticket Office at 734.764.2538 or visit ums.org.

The handful of events that immediately catch our eyes are right here. We're so stoked to see Steve Reich's "18 Musicians" performed live; this is such a rare treat. To see the entire list, head to ums.org, OK.


We've heard that neo-spritual-jazzer Kamasi Washington is terrific live. He and his band The Next Step will come to Michigan Theater on Friday, September 23 at 8 pm. The 35-year-old tenor saxophonist collaborated and appeared on rapper Kendrick Lamar’s platinum album To Pimp a Butterfly and has also performed with Snoop Dogg, Gerald Wilson, Mos Def, Quincy Jones, and Chaka Khan. Earlier this year, Washington’s recently released solo album, The Epic, was awarded the inaugural American Music Prize, which recognizes the best debut album of the previous year across all genres.


Meredith Monk and her Vocal Ensemble will perform Monk’s newest work, On Behalf of Nature, at the Power Center on Friday, January 20 at 8 pm. Drawing inspiration from writers and researchers who have sounded the alarm on the precarious state of our global ecosystem, the work offers a poetic meditation on our intimate connection to the natural world and the fragility of its ecology.


Dennis Russell Davies will lead the Bruckner Orchester Linz with Angélique Kidjo (vocalist) and Martin Achrainer (baritone) on Thursday, February 2 at 7:30 pm. The orchestra will kick off Black History Month with a program featuring works by composers who wrote about the experience of Africans and African-Americans, including Alexander Zemlinsky’s Africa Sings, which was written in 1929 and features poetry by Langston Hughes and other prominent writers from the Harlem Renaissance. The program also features Phillip Glass’s recent collaboration with featured Beninese singer Angélique Kidjo based on three poems of Ifé, as well as Duke Ellington’s Black, Brown, and Beige Suite and Gershwin’s Porgy and Bess Suite, arranged by Morton Gould.


Third Coast Percussion and a group called Eighth Blackbird will perform Steve Reich’s Music for 18 Musicians on Saturday, March 18 at 8 pm, celebrating the composer’s 80th birthday in 2016 and marking the 40th anniversary of the piece.


Pakistan’s next inspiring diviner of South Asia’s humanist, folk, and Sufi texts, Sanam Marvi will perform her well-loved repertoire of sufi, ghazal, qawwali, and folk songs in Rackham Auditorium on Saturday, April 15 at 8 pm. An in-demand performer rarely heard outside émigré circles, she makes her first extended tour to the US.


Modern global music pioneer King Sunny Adé will take the stage at Michigan Theater on Friday, April 21 at 8 pm. Adé is credited with modernizing the evolution of jùjú music — the Nigerian popular music, rooted in traditional Yoruban percussion and rhythms.


At the end of the 2016-17 season, UMS presents a special concert by Yo-Yo Ma (cello), Edgar Meyer(bass), and Chris Thile (mandolin) in Hill Auditorium on Saturday, April 22 at 8 pm. This special concert includes transcriptions of excerpts from Bach’s "The Art of the Fugue" and various keyboard works, as well as organ and viola da gamba trio sonatas. Yo-Yo Ma playing Bach— what else can you ask for? This concert is currently available only to subscribers; remaining tickets go on sale on August 15, 2016.