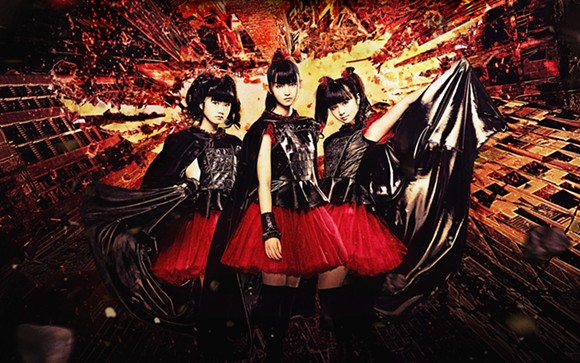 Babymetal — a Japanese act that somehow manages to fuse glitzy pop and heavy metal music and are fronted by three teenaged singers backed by a four-piece band — are appearing at the Fillmore tomorrow, Wednesday, May 11. This show is part of their world tour in support of their brand new album Metal Resistance. Tickets are still available, right here.


This is one of those shows where you're likely to show up as a skeptical viewer just going to check out this thing as a novelty, and leave the event a rabid fan.

The band caught a lot of folks' attention when they made their U.S. late-night TV debut on The Late Show with Stephen Colbert a month ago, performing “Gimme Chocolate” off their debut album. The performance has already garnered over 3.5 million views and caught the attention of Vanity Fair, Wall Street Journal, USA Today, Entertainment Weekly and Esquire, among others.