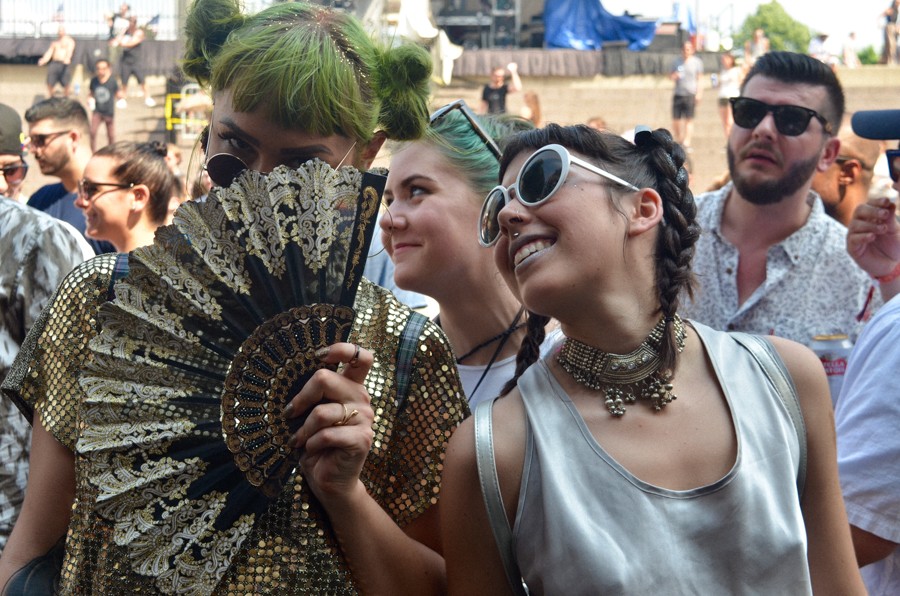 Saturday, the first day of Movement, was feverously hot and humid. We started the day out at the Interdimensional Transmissions showcase at the Opportunity Detroit Stage. Catching the last half of Derek Plaslaiko and Mike Servito, two former Detroiters who were have been playing since the '90s rave days. In true Interdimensional Transmissions fashion, the set was a mixed bag with a healthy dose of electro, techno, and acid house. The stage felt like it was in a forest, with two trees directly in front of the stage, which provided some meager shade to the oppressive sun. Although a smaller stage, the sound was great, and we even heard the classic "Space Invaders are Smoking Grass."

Wandering around, we stopped by the Metroplex booth. Juan Atkin's label – he's often considered the founder of techno – were selling various 12-inches and shirts. The records on display looked like they were dripping from the heat. We also checked out Mahogani Music's booth, which is owned by another Detroit icon, Kenny Dixon Jr aka Moodymann, who had a lot of Prince merch for sale. Someone commented that the lemonade stand, simply titled "Lemonade," has been there since the first festival.

Next up it was over to the Red Bull Music Academy Stage to watch Kyle Hall. Surprisingly, we had only witnessed roughly three pairs of furry boots at this point. We notice a lot of people with these new hip flat glasses and seemingly more people vaping. Sitting down in the grass near the sound booth, we overheard some randoms telling a story of someone who thought they had seen New Kids on the Block at Movement the previous year.

Kyle Hall's set was chill and had a soulful jazz feel to it. It was smooth overall but was still varied and engaging. His choice of tracks worked well. While his set was ending, we saw a guy moving a glass orb around on his arms while someone else filmed it. He looked pretty serious.

We stuck around for Dam Funk, who I think at some point said that Kyle Hall was on his new record, but he might have said something else. The set was advertised as a “DJ set,” but the guy definitely got up on the DJ table and was dancing and singing. He sounds like California in the '80s. Warm and funky, it was a nice segue from Hall. He was constantly promoting his record during his set, but the guy seemed genuine and it wasn't annoying. He also ended a song with an a cappella part that could have also easily been annoying but wasn't.

We watched Juan Atkins and Mortiz Von Oswald's "Borderland" for a moment before leaving to get food. It was conceptual and had a similar feel to a soundtrack instead of being a DJ set. Upon exiting, we saw a number of dudes sleeping in their cars waiting for someone.

When we came back, it was time for Kraftwerk. What can you say about Kraftwerk? Vitally influential across the board in music, but also crucial in the development of Detroit's electronic music scene, the German group pretty much changed the game. Detroiters are so in love with this band that we couldn't get close enough or at the right angle to experience the 3D. The sound was great, and after moving to one side and squeezing in among the mass of people, we were finally able to at least see them. They had on stripes. They played a kind of DJ set version of their songs along with choreographed video. I've seen them before, so I wasn't that bummed that I didn't get the full experience, but it was great either way.

We ended the night back at the Red Bull Music Academy stage watching Caribou. At this point in the evening it was full on music festival rave time. Caribou, who at least in their live incarnation, are more of band, play music that you might consider more proggy pop dance music than your standard Movement group/DJ fare. They definitely incorporate prerecorded elements, as well as play instruments live, but also add a fog machine to make it more visually confusing as to what the hell is going on. But however you want to describe it, no one around us seemed to care. They were on another level, or whatever you want to call being on a lot of drugs.

Overall, the first day was interesting, hilarious, fun and weird. Just the way Movement should be.