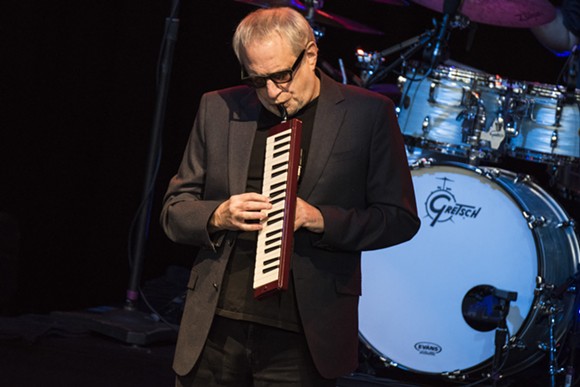 The magic of Steely Dan concerts can be pinpointed to the moment when Donald Fagen, Walter Becker, and the musicians with them tackle something like “Aja.”

When that layered, nuanced, 8-minute-long piece arrived two songs in at DTE Energy Music Theater on Wednesday, the audience was right there with it, and the applause was in appreciation of the music.

When the Dan came to DTE in July 2015, temperatures were hovering at a record-setting 90 degrees. This year’s visit brought a set in more humane weather that included some of the most obvious picks (“Hey Nineteen,” “Reelin’ In The Years,” “Josie”), as well as fan favorites not heard as often on FM radio (“Show Biz Kids,” an encore of "Pretzel Logic").

Fagen’s voice was in nice harmony all night with backup singers The Danettes. Coming from a singer who was shy about live performances early in his career, Fagen’s vocals have the ability to surprise even at the age of of 68. When Fagen held a particularly fine note during “Hey Nineteen,” the crowd let him know they heard it.

One white elephant in any room during “The Dan Who Knew Who Much” tour is the matter of misdemeanor assault charges filed against Fagen after an alleged scuffle with his wife, Libby Titus, in New York City in January. Fagen reached a deal that will see the charges dropped after a year passes without incident, according to The New York Post.

Becker's onstage monologue, also during "Hey Nineteen," was as present as ever in Clarkston, with a greeting that began with “I love it here in Detroit” and ended several minutes later with a sexualized lead-in back to the song, and not without several lines of “Brandy (You’re A Fine Girl)” sung during a story in-between. (Becker recalls Looking Glass opening for the Dan at a 1970s Pine Knob gig.)

Sometime around “Peg” or “My Old School,” Becker appeared to wave back the band’s baritone saxophonist, and the guitarist turned many times during the remainder of the night to face the horn section while playing, clearly in the role of bandleader.

A tight “Time Out of Mind,” a “Dirty Work” with the Danettes on lead vocals, and “Josie,” with a well-executed solo from Becker, were other highlights.

We missed half of opener Steve Winwood’s set: The Traffic and Blind Faith cofounder went on three minutes or so after the 7 p.m. start time printed on the ticket, and played “I’m A Man,” “Can’t Find My Way Home” and more while much of the crowd was still waiting on the other side of the gates.

We hope the addition of metal detectors at DTE — and a recent trend of Baby Boomer rockers going onstage with the punctuality of a Rolex — are taken into consideration for the rest of the summer concert season.

Winwood is a serious, professional musician who visibly focuses on hitting the vocal mark. At 68, his voice is confoundingly high and pure when singing songs he cut with The Spencer Davis Group at 18.

“Low Spark of High Heeled Boys” was given the room it needs to breathe, and the Grammy-winning “Higher Love” was done with a bouncy rearrangement that included bongoes.

Winwood strapped on a Fender for “Dear Mr. Fantasy,” at which point my mother began rocking to-and-fro in her seat. Winwood's long, 1960s-vibe guitar solo on “Fantasy” ended with what sounded like a surprise nod to Deep Purple’s “Child In Time," before the rocker closed with "Gimme Some Lovin.'"