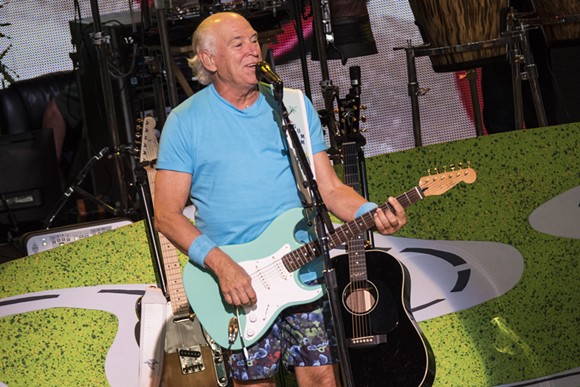 At ground zero of the RV area at the Jimmy Buffett tailgate, we found the holy grail: a hot tub on the roof of a converted school bus.

A backhoe was used to place the hot tub on the bus’ roof, says owner Tim English, where it now bubbles with dolphin balloons standing guard.

The creative setup was among Parrothead contraptions that included a swimming pool rigged in the back of a pickup, a miniature beach, portable toilet stalls, and Super Bowl-level chip-and-dip operations before Saturday’s Buffett show at DTE Energy Music Theatre.


The creativity of my companion and I extended only to pouring Molson in styrofoam Steak ‘n Shake cups for pre-gaming purposes.


After making his summer tour stops in Detroit for several years, the 69-year-old parrot-in-chief returned to Clarkston for a sold-out 23rd appearance at the venue on a hot night, with Pine Knob favorite Huey Lewis and the News opening.


Once the faithful made their way inside the venue (the parking lots at DTE opened at 2 p.m.), the setlist had some welcome surprises, including the rarely played “Coconut Telegraph” early on.


“Grapefruit — Juicy Fruit” was dedicated by the barefoot Buffett to his late friend Jim Harrison, the Michigan author, poet, and one-time Key West wild man who died in March.


“He loved this song in Key West,” Buffett said. “It’s a hangover song. It worked well for Jim.”


Buffett is featuring a different album each night on the “I Don’t Know” tour, and at DTE it was 1978’s “Son of a Son of a Sailor.”


There were beach balls in the air in the pavilion most of the night — and an unfortunate talking coconut on the big screen that narrated the show, with the fruit’s voice provided by Jeff Bridges.


“I bet 85 percent of the people in this audience have been on a cruise,” my companion said.


Buffett hit on his must-plays: “Come Monday,” “Fins,” “Margaritaville,” “Changes in Latitudes, Changes in Attitudes,” “One Particular Harbor,” “Cheeseburger in Paradise,” “A Pirate Looks at Forty,” and “Volcano.” Some deeper album cuts included “Love and Luck,” “I Don’t Know and I Don’t Care.”


Later in the show, the crowd sung along with “Take it Easy,” added in memory of Eagle and Royal Oak native Glenn Frey, who died in January. Also played was “Gypsies in the Palace,” a song Frey wrote with Buffett that charted in 1985.

The show closed with “Coast of Marseilles” from “Son of a Son of a Sailor.”

Warm-up act Huey Lewis and the News gave an energetic performance, with Lewis dancing all over the stage, delivering hits such as the danceable “Power of Love,” “I Want a New Drug,” and “Workin’ for a Livin,’” and pausing at one point to sample a margarita.