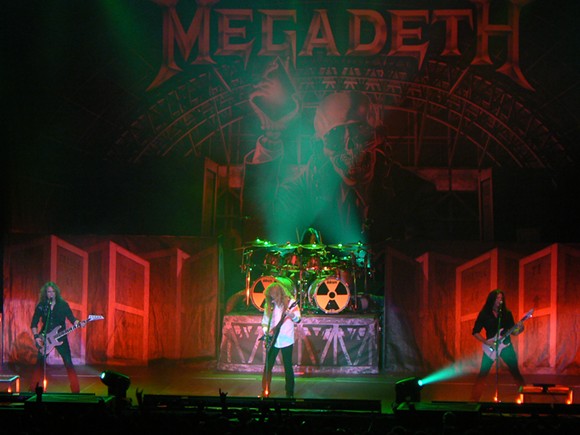 Global metal pioneers Megadeth have premiered the video for the new single "Post American World," along with complete details for the fall dates for the North American leg of their Dystopia World Tour. The tour visits Joe Louis Arena at 6 p.m. on Sunday, October 9 as part of the Joe's farewell season. Special guests include Amon Amarth, Suicidal Tendencies, Metal Church, and Havok.

"The filming of 'Post American World' was an eerie video shoot right from the beginning. Shot in just one day with only our guitars and drums, I knew that this was going to be amazing," said guitarist Dave Mustaine. "There is something to be said about the simplicity of an artist and only his guitar or drums. This is clearly a 'less is more' concept, and director Jake Macpherson nailed it!"

Tickets for Megadeth's Detroit stop ($25, $45 and $55) go on sale at 10 a.m. on Friday, July 22 and can be purchased at OlympiaEntertainment.com, The Fox Theatre and Joe Louis Arena box offices. Go to www.megadeth.com/tour for ticketing info and more info.