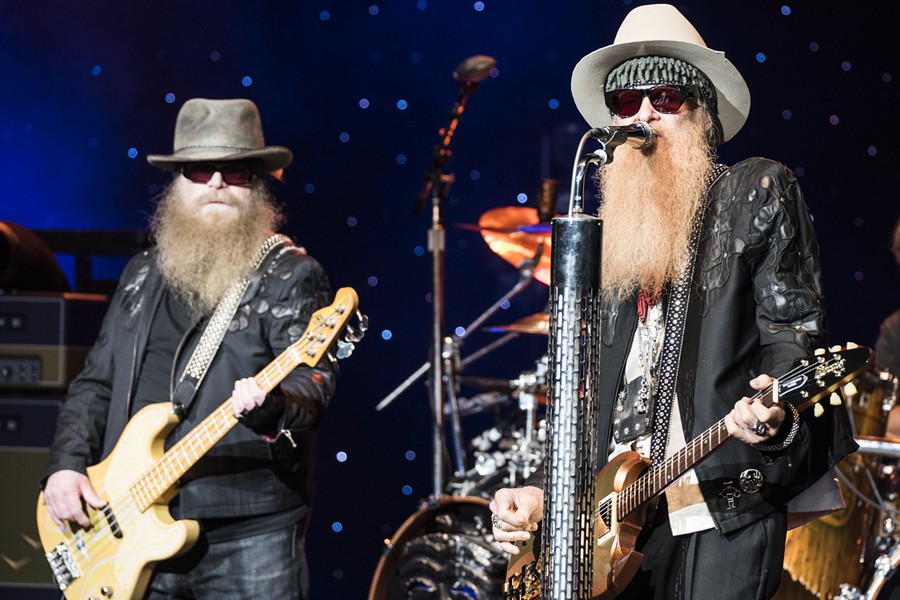 After an illness forced Gregg Allman to back out of his Wednesday double-header with ZZ Top at DTE Energy Music Theatre, the bearded rockers from Texas went on with the show — and not quietly.

Guitarist Billy Gibbons, bassist Dusty Hill, and drummer Frank Beard hit the stage just after 8 p.m. with “Got Me Under Pressure” and ripped through a set that came in at just under 90 minutes of loud southern rock.

One of the pleasures of seeing ZZ Top live is that the trio’s original lineup is intact, and after 47 years together, it’s fair to say they’re dialed in.

Drummer Beard is astoundingly good and grabbed our attention by the second and third songs (“Waiting for the Bus” and “Jesus Just Left Chicago”). “I’m Bad, I’m Nationwide,” from 1979’s Degüello, was a great inclusion played before the sun went down Wednesday.


Unlike some of their rock ‘n’ roll peers, ZZ Top has had hits in the 21st century, and included “I Gotsta Get Paid,” an unlikely revamp of DJ DMD’s rap hit “25 Lighters,” in their DTE set. The track is from 2012’s La Futura, an album that reached No. 6 on the Billboard Top 200.


A cover of Jimi Hendrix’s “Foxey Lady” saw Gibbons letting a fun solo rip on the gold Gibson SG he played for most of the night. Gibbons is a fluid, masterful guitarist, and at 66, his distinctive voice remains almost completely intact, too.


While Allman’s unfortunate absence undoubtedly affected attendance, the pavilion filled in nicely through the night, and the weather ended in a perfect summer evening and a colorful sunset after rain earlier in the day.


“Sharp Dressed Man” was the peak of the show, with the crowd singing along, Gibbons and Hill working the stage in their trademark black outfits, hats, and shades, and Hill in particular doing his bass part justice.


“Dude, they killed the song they needed to kill right there,” said my concert companion, MT contributor Larry Dabs.


ZZ Top were loud, as they should be, but the sound was bass-heavy to the point of blaring early in the set. The mix evened out as the show went on.


Retro green-and-white Magnatone amps behind the guitarists made for a cool visual all night: ZZ Top brought them on tour after the classic speakers returned to the market a few years back.


ZZ Top's Clarkston show ended with a first encore of “Legs,” complete with Hill and Gibbons playing matching fuzzy guitars, before the trio left the stage and returned for “La Grange.” Gibbons played his guitar one-handed for several moments during the “Sloppy Drunk Jam,” and a roadie lit a cigar for him during “Tush.”


A dog wandered onstage briefly before the band came back for a final encore of “Jailhouse Rock.”

The house lights were up by 9:30 p.m. — with Allman out of the picture, it wasn’t going to be a night that came anywhere near the venue’s 11 p.m. curfew. But ZZ Top on their own made for a great evening of rock ‘n’ roll, and a concert-goer behind us summed it up during the walk back to the car: “Well, that was a hell of a show.”