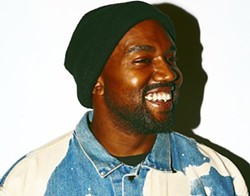 Well, the Kanye West pop-up has popped up and surprise! it's actually not in Detroit.

At around 11:00 a.m. Friday morning, the doors opened inside Lakeside Mall in Macomb County to crowds of people excited to get their Pablo gear (white t-shirts with gold lettering and shit).

Apparently, excited Kanye fans had been told the store would open at 10:00am and were none too pleased by the delay. The delay of a store opening by an artist who once penned a song all about how he's late, imagine that.

Meanwhile in Detroit, we're rioting because they won't let us in and we can only get 2 items. @TeamKanyeDaily pic.twitter.com/nF1KLc4fJ9

From the looks of it, the space is practically empty, save for a few metal, portable clothing racks. One customer described it as "modern, I guess."

Luckily, the Free Press was there asking questions awkwardly, requesting first few customers to show off their duds and disclose how much they spent.

You can watch the stream here, it's painful yet slightly amusing.