Review: James Bay made everyone swoon at the Fillmore 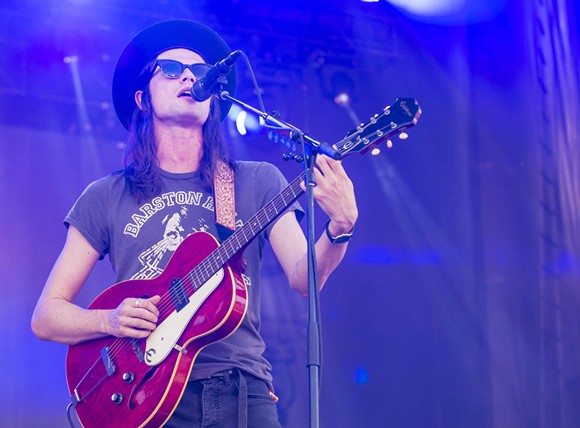 I've been to many concerts where women (and lots of times the men, too) go absolutely bonkers for the lead singer, (Luke Bryan, John Mayer, hell — even Bruce Springsteen) but I have never seen anything like the fans at James Bay's headlining show at the Fillmore last night. No matter your gender or sexual orientation, James Bay made everyone fall in love.

And I wasn't surprised either once Bay (in a way — he became everyone's "bae" that night, too) announced to the sold out crowd that this was his first proper show in Detroit. He played the Mo Pop festival in the summer of 2015, but has not been back since. So it's safe to say that every metro Detroit James Bay fan was extremely excited.

Bay mostly played material from his 2015 debut album, Chaos and the Calm. The songs on the album (which earned him 3 Grammy nominations, including Best New Artist) are all classic rock songs for the new millennials. Songs like "Let It Go" and "When We Were on Fire" had the entire theatre dancing and singing while slower tunes made the floor at the Fillmore look like a swaying ocean.

Bay has this appeal to him that I can see going a long way. He can easily connect with the audience with his presence alone, but he is also super talented, which was a pleasant surprise. Bay ripped through many different guitars, from an acoustic to electric.

The best part of the show came from the encore when Bay brought out openers Joseph (whom I have not stopped listening to since last night) for a bluesy cover of Janis Joplin's "Piece Of My Heart." He was even sporting a "Detroit Vers Everybody" shirt that surely won everyone over if he hadn't already.

And of course, when the band played the ever-popular "Hold Back The River" the entire Fillmore Theatre was jumping. It was hot, sweaty, and everyone was having a ball.

Teenage girls, middle-aged moms, boyfriends and husbands, and even some gay guys were all having a grand ole' time while falling in love with James Bay.