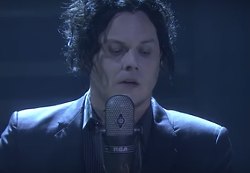 For everyone left waiting since 2004 for another A Tribe Called Quest album, there's finally some good news.

Q-Tip posted on Facebook Oct. 27, the group would release We Got It From Here, Thank You For Your Service November 11. The album will feature artists like Kendrick Lamar, Busta Rhymes, Elton John, Andre 3000, and our very own Jack White.

The album title, I'm sure, is a tribute to Phife Dawg (who died March 22, 2016 due to complications with diabetes) and acknowledges their effort to finish the album. The former three-man group - Q-Tip, Phife Dawg, and Ali Shaheed Muhammad - started on the album shortly after a live performance on The Tonight Show last November. Q-tip said the energy felt right after their 18-year hiatus from performing publicly.

In the Facebook note, it was made clear this would be "obviously the last A Tribe Called Quest album" and noted it would not contain "old Phife bars." This album comes at a perfect time for hip-hop. Despite a few artists keeping the "old-school" hip-hop alive, there has been a lot of legitimate hot garbage being passed off as hip-hop.

This album, who pine for intelligent lyrics and proper storytelling, can enjoy a brief peace of mind that those artists still exist. It may be safe to assume this will be an album where the lyrics can be heard, understood, and related to. There is nothing worse to a hip-hop fan than mush-mouthed mumbling. Thank you A Tribe Called Quest, you are our only hope.