Celebrate the music of Moondog, tonight at Trinosophes 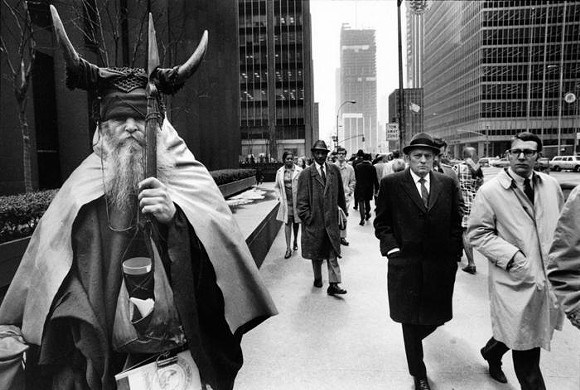 It's no secret that Metro Times loves the music of composer Louis Hardin aka Moondog (1916-1999). Naturally, we were stoked to learn that two local ensembles will perform his mesmerizing music tonight, Friday, Nov. 4 at Trinosophes.


We emailed a bit with Frank Pahl regarding the evening. Excerpts from his responses to our questions follow.

Frank Pahl: Like most people, I first experienced Moondog through photos either in magazines or on album covers. His strange home-made clothes and associations with famous people (Benny Goodman, Toscanini, Cassius Clay, Charlie Parker, Marlon Brando and more visited him in his three decades of off and on busking in NYC) generated as much curiosity as his music did.

In the 1960s, he was performing with and influencing Philip Glass, Steve Reich and Jon Gibson. Moondog stayed off and on with Philip Glass during this period. Even though he will be remembered as being an early minimalist, I believe there is another group Moondog belongs. Along with Charles Ives, Harry Partch and Conlon Nancarrow, he's one of a very small handful of 20th century American musical iconoclasts who gave generations of new music composers permission to forge their own way.


Moondog and Michael Nyman are my favorite minimalists. They are both composers you can revisit, and discover new things. Of course, learning the material from scratch also allows you to get inside of a composition in a way that you can't when listening. When I hear Moondog now, I hear pop, rock, folk, jazz and classical. To think that many of his iconic pieces were written in the '40s and '50s is amazing.

We learned a dozen of his pieces, though only two of the pieces had existing notation. One has to take liberties since some of his instruments were home made. There was no notation for the vocal rounds but they were brief enough (eight measures). When it came to the vocal rounds the trick was the precision. If it's a four-part round and someone is less than precise, the harmonies can be unforgiving. The performance at Trinosophes is our first of his music.

You asked about interpretation: Many of his pieces were recorded several times and reveal different arrangements and instrumentation. In most cases, I tried to think of this ensemble, and adapt accordingly.

We had a good rehearsal last night, and I'm stoked for tonight. This is the first time this particular version of the the Lovely and the Wretched has played out and I'm looking forward to presenting Moondog with them and getting together with Scavenger Quartet for the first time this year.