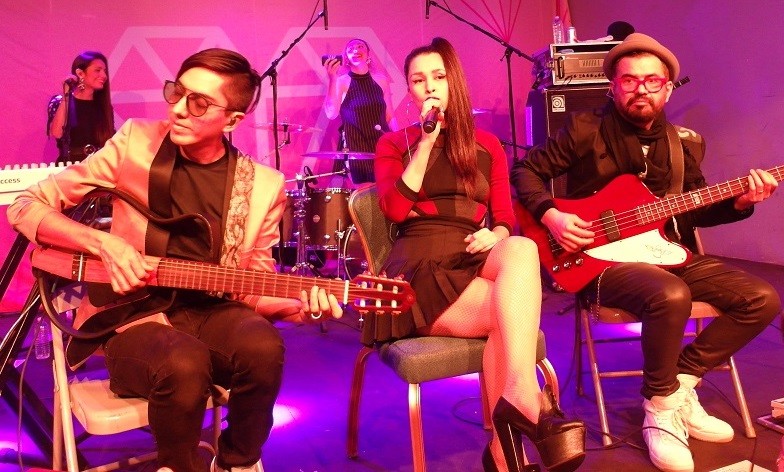 When I heard one of my favorite Mexican pop acts, Belanova, would be making their first stop in Detroit at El Club I became giddy at the thought that I’d get to review the show. For a Grammy Award-winning act, whose synth pop beats served as the soundtrack to countless Latino millennials throughout the Americas, to include southwest Detroit in its multi-city tour speaks volumes.

I wasn’t alone in my glee. Just about every square inch of the Vernor Highway venue was filled to capacity by the concert’s 8 p.m. listed start time. And why wouldn’t it be? Belanova has been topping international record charts since their founding in 2000 in Guadalajara (in the Mexican state of Jalisco, where many Mexican Americans in Detroit have roots). They’ve managed to use their playful sound and style to carve out a strong following both in Latin America and the United States, thus far without succumbing to pressures to cross over in English.

Thursday night, as fans surged through the doors show organizers seemed overwhelmed by the sheer magnitude of the crowd. At one point, the flow of ticket holders was held back from entering the stage area, while VIP guests were let in early to snap photos with the band’s trio – vocalist Denisse Guerrero, Ricardo “Richie” Arreola (bass, guitar), and Edgar Huerta (keyboards, programming).

After the meet and greet, the rest of the guests were allowed in to finagle space near the stage. Following an opening act by a songstress who covered a mix of pop singles, the group emerged about 10 p.m. to the delight of patient fans. Guerrero – wearing a black pleated skirt, tall Mary Jane platforms, a retro-looking cropped sweater, and her hair in an ‘80s side pony tail – instantly connected with fans with her famous wide-eyed, pouty expressions and go-go dance moves.

That connection continued throughout the 90-minute set, with an energetic fanbase singing right along to a string of Belanova hits, starting with Niño from their 2005 album Dulce Beat. The group went on with a charged 15-year trip down memory lane, with 19 tracks including Mariposas (Sueno Electro II, 2011), Tus Ojos (Cocktail, 2003), Baila Mi Corazon (Fantasía Pop, 2007), and Rosa Pastel (Dulce Beat, 2005).

About midway through the set, the trio broke from their own music briefly and were seated for a couple of acoustic tracks, including a cover of the romantic 1940s bolero, Bésame Mucho.

The show was part of the group’s North American tour to promote their upcoming album, Cásate Conmigo (Marry Me). So tucked in between the standbys, was a taste of their first new material since 2011. Shortly after the acoustic portion, the group introduced the crowd to one of two new singles, starting with Maldita Soledad, which departed some from the band’s signature electropop energy to more of a ballad vibe, with dramatic keyboard work from Huerta. Next, came a spectacular cover of Tejana singer Selena Quintanilla’s Como la Flor – a treat for the Mexican American fan base and a foreshadow to the sound of the new album’s title track that followed. The single carried hints of the late Tejana queen’s sound, perhaps a nod to Quintanilla’s recent resurgence in popularity.

The venue, though cramped, worked well for the acoustics, with the funkiness of Huerta’s keyboarding bouncing off the walls, Arreola’s bass and guitar riffs reverberating through the floor, and the vocals of the intimate crowd lending to Guerrero’s playful, charismatic hooks.

Thursday’s show isn’t El Club’s first foray into appealing to the neighborhood’s Spanish-speaking market. Open only since earlier this year, the venue to has already booked some star-studded acts, including Mexican powerhouse rock band Molotov and Chicana punk icon Alice Bags, and the momentum seems to only be getting started.

Among the talent soon to perform at El Club, Detroit’s own Jessica Hernandez and the Deltas who’s set to perform there Nov. 17-18. The Mexican-Cuban American Hernandez was among those in the crowd Thursday night, joined by her father. She told me us she usually expects acts of this caliber in cosmopolitan clubs in Mexico City – not Detroit. Surely, with the response we both witnessed, the demand is there for more. To that, we say, bienvenidos!