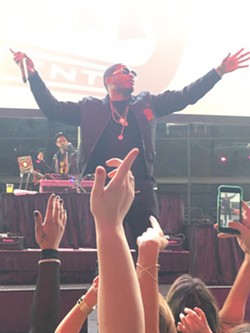 It must have been the money that made Nelly perform at a company's Christmas party, eh?

United Shore, based in Troy, not only celebrated the holidays with a Christmas party at COBO Center, but it was also the company's 30 year anniversary which is a pretty big deal.

In celebration of the milestone, United Shore went all out and booked none other than Nelly to do a surprise performance for the employees — and we must say that we're slightly jealous that we didn't receive an invite.

The company tells us that Nelly performed for more than an hour and the crowd was eating it all up. There's a short video below of his surprise performance.