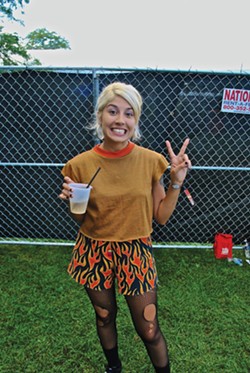 After months of making us beg and hope for new music, Jessica Hernandez and the Deltas are back with a brand new single following her 2014 release Secret Evil.

The new song comes before the band's highly anticipated sophomore album and is called "Hot Damn," which literally was the first thing I said after giving the song a listen. Seeing her play the live version at El Club last month was fantastic, and the recorded version is just as great.

A driving drum and guitar lead out the song before Jess pops in with her signature vocals that sound better than ever. Hernandez got married this past year, but she's still singing about love when she belts out, "I can be your baby / I know that I seem crazy." Jess's signature growl is all over the track, but it's when she twirls up into her upper register that the song really grooves. My foot was tapping the entire time.

You can grab the song at iTunes, Amazon, or Google Play. And you can listen to the song here at Spotify.