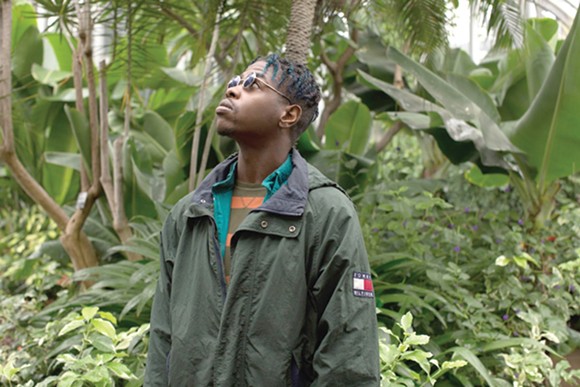 In the past few years, Sheefy McFly has taken a hiatus from his monthly prolific hip-hop showcase “The Air Up There” to focus on his first love (the visual arts — we trust you've seen his show at UFO Factory?) as well as learn about Detroit techno.


Within that time frame, he has been a part of the Red Bull House of Art's Murals in the Market project, and has released his debut 12" as Edward Elecktro via Mahogani Music.

Today, Sheefy McFly is working on a hip-hop album called Murals, which he describes as an "audio masterpiece." These two singles debuted here are just a glimpse of what the rest of the album will sound like.


The “Raw Shit’s” super melodic beat is produced by beat maker extraordinaire Hir-O and features a guest appearance by Chavis Chandler. Sheefy’s bars range from police brutality to getting paid, “Eric Gardner, Alton Sterling/ Philando got murked in front of his girlfriend. Pigs hunting my people like they're cattle, riding our backs, horses and cattle.”

"Baby Lungs" is kind of a cool spacey track (also produced by Hir-O) and features a really cool hook by Jame Linck. This cut is basically Sheefy spitting swagged-out bars, “I don’t walk into after midnight/I’m a boss I stay away from the limelight. At the party standing in the shadows/ dodging my haters and them groupie ho’s.”

Sheefy will be releasing Murals in the Spring.