I nearly got a parking ticket Saturday night in the nearly futile quest to try to find a legal spot to park in Ferndale. I followed the car ahead of me, and didn’t stop, through a "Michigan U" on Woodward. Yes, I guess you really do have to stop, even when it’s clear. After being pulled over, even though nice Mr. Police Officer did not give me the ticket, and told me to have a good night, I was still thinking maybe I should call the night off. I decided to play that game of “if I don’t find a parking spot in the next 5 minutes...” and found a parking spot within four minutes. It turns out that the show was so good, even if I had gotten the ticket, and spent a half hour parking, I would have still counted it a spectacular night.

Dear Darkness kicked the show off with a set of frantic post-punk that would fit in the K records and Simple Machines catalogs. With just a guitar and drums, Stacey and Samantha pounded through each song with a spat venom and touch of sweetness. They downplay themselves with self deprecating humor that adds to the fun of “we’re experiencing greatness that feels like it could topple near disaster at any moment.” They have a new EP coming out soon and I’d place them high on my list of local bands to follow.

Kaleido, who have quite a following around town, gave the crowd what they were expecting: a loud hard-rock assault, but topped it off with energy and crowd interaction that was sure to capture some new fans. Christina Chriss is the vocalist and focus of the band as she struts around the stage with an edge that reminds you of Gwen Stefani in her edgier days. The band is tight as hell as each of the members get their moments with guitar and bass breaks. Their set included a Guns 'n' Roses cover and a touching ballad.

Siamese is fronted by the always charismatic Jo Champagne, who gets props for pulling this bill together tonight. I’ve seen Siamese many times and will continue to as they are one of those bands that evolve every time they are on stage. Jo wasn’t the only intense one in the band tonight, as their bassist Eric snapped a string, yes, a bass string, early in the set. Siamese play rock with a goth leanings but manage to make it sound fresh and vital.They did their wonderfully sublime cover of the Church’s “Under the Milky Way” and some new songs. 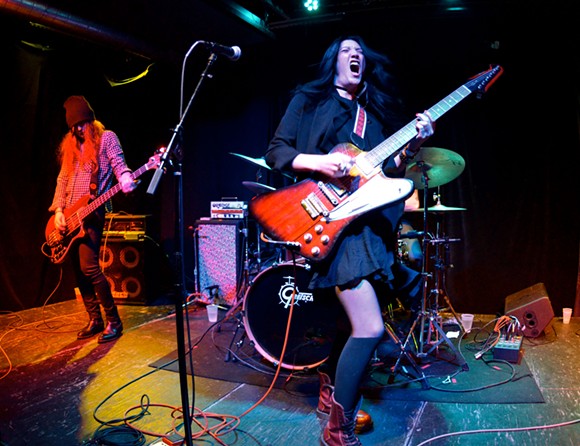 Queen Kwong ended the night with a set that I am already sure will be one of the best I see this year. Here’s a band I’ve wanted to see many times throughout the past couple years but always missed for one reason or another. Queen Kwong played a blistering set of psychedelic, hard rock that pulsated with tribal rhythms reeling in the crowd. Each song in itself was a sonically inspired threat delivered by Wes Borland’s amazing guitar work coupled with Carre Calloway’s spellbinding vocals and effects. While they have played out twice this month, I don’t think we’ll be as lucky the rest of the year, so if you see them on a bill make it a priority to see them. I know I will.