Now in its fifth year, Dilla Youth Day continues to expand its participatory programming to be ever more diverse and fun. The event, named of course for Detroit's pioneering hip-hop producer J. Dilla, is a celebration of aesthetic and technological innovation and invention in Detroit. The event is lots of fun for families and youth. Hands-on workshops, jaw-dropping performances, informative lectures, and the best music you will hear anywhere near the city today — it’s all on hand.
Starts at 1 p.m.; 315 E. Warren, Detroit; 313-494-5800; admission is free.

In advance of the event, we spoke with Dilla Youth Day founder Piper Carter about its history and what folks can expect on Sunday.

Metro Times:  When did you start Dilla youth Day?
Piper Carter: I started the first Dilla Youth Day in 2012.

MT: Why did you start Dilla Youth Day?
Carter: I was previously owner of a multi media all elements hip hop space located in Corktown called 5e Gallery (named after the 5 elements of Hip Hop and also because the other co owner Sicari Ware was in the Detroit Historical group 5 ELA of which both the Late Greats Proof (R.I.P.) & Dilla (R.I.P.) had both been involved).

Among the many important aspects of our mission was to uphold, teach & build a home for Detroit Hip Hop Legacies & Histories, support underserved communities especially Youth and Detroit Hip Hop Artists, & that included a plethora of services we provided.

Sicari had owned the space with previous partners from the Southwest Detroit community & because he's a DJ & B-Boy their focus more around jams &a parties with occasional graffiti art shows. It was a raw space so they only opened for special events.

When I came on board I decided to have it open everyday during the daytime as a gallery & community space for families and youth.

Because we are both Hip Hop enthusiasts from Detroit who had lived other places & been imbedded in the grassroots Hip Hop communities outside of Detroit we understood the value & influence that The Creator of Neo Soul had on the world because we experienced those cultures first hand.

We decided that it would be important to join the rest of the world and celebrate the Legacy of J Dilla during the month of February and that it is important that Detroit have a strong Dilla Day support foundation for that legacy. We learned that there had been a few iterations of members of The J Dilla Foundation since his passing in 2006 and they had done tributes before we came along and somewhere along that time had disbanded. I met Kindra Parker who had restarted & restructured the organization starting in 2009.

She introduced me to Dilla's Mother Maureen Yancey aka Ma Dukes and we asked her permission to celebrate her son. That first celebration that we organized took place Feb 2010. It was at the first 5e Gallery building and Mochilla had just released "A Suite for Ma Dukes", a beautiful black and white documentary film shot by Legendary Hip Hop Photographer B+ about the Conductor Miguel Atwater Ferguson writing Dilla's beats out as sheet music and playing it in concert in Los Angeles with 60 musicians he contracted.

They flew themselves out to Detroit to screen the film & gave everyone CD's & DJ Houseshoes came & spun, PhatKat, Guilty Simpson, Slum Village, & many other Detroit legends performed, Dream Hampton Hosted and we gave Ma Dukes an award. We called the event "Ma Dukes is The Foundation" which was a play on words because we also had an event called "The Foundation" that was a weekly open mic dedicated to Women in Hip Hop. We charged a door fee & the entire proceeds from the door went to the J Dilla Foundation.

The following February we hosted Dilla Day again with a panel discussion that included Legendary Funk Musician AMP Fiddler who is also from Conant Gardens and mentored & taught J Dilla how to open up the MPC and Tweek it (which is how he created his signature sound that everyone tries to mimic). Also on that panel we're 5 ELA and G-Unit Detroit music Producer Nick Speed, I believe DJ Head (the man responsible for many successful projects including those of Eminem & Dr. Dre) was on there as well. He brought the actual SP1200 that Dilla used to make the Tribe Called Quest beats and many others.

We had asked Urban Stringz Youth Orchestra to open our show after the panel. They are a wonderful group of youth led by Cellist Cecilia Sharpe and she teaches them how to play string instruments. When they finished their performance I got on the mic and asked them to free style. They looked at me like I had two heads and after much coaxing decided to give it a try. Nick Speed & AMP Fiddler freestyles with them and that's when it hit me: We need to be doing tributes for the youth so they can learn the history! That was the last year we charged a door fee.

In 2011 we began doing serious youth trainings on social justice and technology. We received funding through a partnership with The Detroit Digital Justice Coalition and Allied Media to create a computer lab that focused on music production. We also gained formal partners BRYCE Detroit & Halima Cassells and joined forces to launch our youth program officially as 5eHeru.

We created a Disco Tech Maker Space model based on a formula of The Detroit Digital Justice Coalition of which we were members (I still am). Basically the formula is like an expo mixed with a conference demystifying technology and bringing needed tools to underserved & marginalized communities.

There are tables all around with hands-on drop in activities that take roughly 10-15 minutes to execute from start to finish with options to go deeper. At each table a different skill is offered by a member of the community with a certain expertise such as coding or soldering or music production. Etc. Anyone can create their own Disco tech with any theme & offer amy skills, we chose Dilla & Music production to highlight the idea of Hip Hop being an integral part of the advancement of technology starting all the way with Kool Herc plugging into the lamp post st his sister Cindy's birthday party on Sedgwick Ave in the Bronx and introducing the Jamaican sound system or Grand Master Flash reinventing the way two turntables are used to create a new sound.

We knew that utilizing Hip Hop to connect young people to Science Technology Engineering Arts & Math in a climate of constant school closures & erasure of history and education was necessary. From there we continued to grow. All of the Detroit Hip Hop Music production Pioneers have been involved donating their time to teach from the very beginning. DJ Los, DJ Head, Nick Speed, AMP Fiddler have all continued to be there from the beginning.

MT: What role do Dilla’s mom and family play in Dilla Youth day?
Carter: Ma Dukes gives us the blessing to have Dilla Youth Day to celebrate her son's legacy and she usually opens our performance showcase this year she'll be skyping in because she will not be in town.

MT: Did you know Dilla personally? Is there a particular story about him you would like to share?
Carter: I never knew J Dilla I lived in NYC until 2008 when I moved to Detroit and I had been a fan who just wanted to see Detroit stand strong for his legacy.

MT: Are any of the events/workshops that are here this year that weren’t there last year?
Carter: This year we are presenting Dilla Uouth Day in partnership with The Yunion and also This year we've got The Creators of Techno from Underground Resistance teaching & demoing, & The Yunion will offer a Parents workshop called Parental Advisory, Michigan Roundtable for Diversity & Inclusion will offer a discussion on racial equity led by teens, Spin INC will have Ableton & various DJ set ups, The Detroit Digital Justice Coalition will offer a workshop on cyber security & digital identity for teens, and Build Institute will offer a Youth Entrepreneurship workshop.

MT: What else will Dilla Day feature?
Carter: • Murad Erzinclioglu, Music Director for CJAM Radio in Canada will offer a workshop "How To Get Your Music Played On The Radio".
• Fab Lab will bring 3D printers & Drone cameras.
• James McMullan will offer hands on workshops on Soldering & Making Electronics & Robotics.
• Dilla's Daughters Ty-Monae' Whitlow & JaMya Yancey will host the performance showcase. It will be their first time as official spokespeople for their father's legacy. Ty-Monae' will also perform.
• Aisha Ellis' son has created a group and they have learned Dilla's music and will play one of the tunes. He's a trumpeter. Aisha Ellis is a Drummer for Jessica Care Moore's Black Women Rock Orchestra and also Malik Yakini's funk reggae band MollyWop.
•Jessica Care Moore's son King has a few surprises he's offering for younger youth.
• We have an early childhood center for youth 5 & under.
• We have a "Healthy Hip Hop Cipher" where young people can rap to their hearts' content.
• We have all kinds of hands on making activities that are hi tech & low tech, mechanical & software based, make & take activities, youth performances, discussions, workshops, and fun fun fun.
• We will have B-Boys, African Dance, & Capoeira.
• We will have photography, Stencil making, T-Shirt making by Stitching Up Detroit who will have a unique design.
• We will also have Dilla's children's book that was just released by Ma Dukes Official & Dilla Merch. 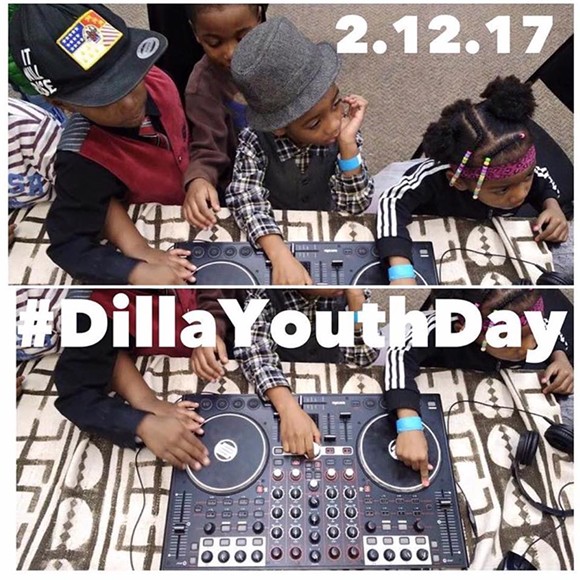