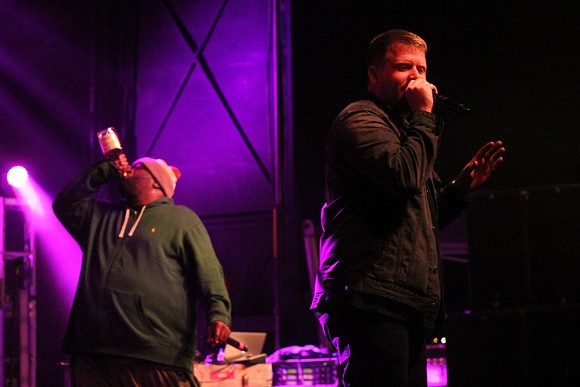 On Saturday night, Run the Jewels appeared for their second sold-out performance at the Royal Oak Music Theater since October of 2015 and – big surprise – they knocked it out of the park yet again.

The show was absolutely filled with highlights and memorable moments. Especially when El-P accidentally shouted out Chicago, and then instead of pretending that it didn’t happen, explained that he was really, really tired and high. Its OK El, Detroit still loves you.

Also incredible was the pair getting the entire audience to sing along to the super-raunchy chorus of “Love Again,” which may or may not have made the author blush. If fellow attendees are anything like myself, they were waiting anxiously during the preceding number to see if Danny Brown would magically appear for his verse. But instead – and equally if not even more cool – was Gangsta Boo gracing the stage with RTJ to out-raunch the both of them, which Killer Mike explains in a pretty interesting video from his talk at MIT below.


She’s still on tour with Run the Jewels, so if you can get tickets you will most likely get to see one of their best tracks from RTJ2 performed as it was intended.

What else can be said except: go see one of hip hop’s most compelling and dynamic acts at the height of their powers. Buy the t-shirt. Explore these two amazing and prolific artists’ incredible back catalog. Do it. Now.