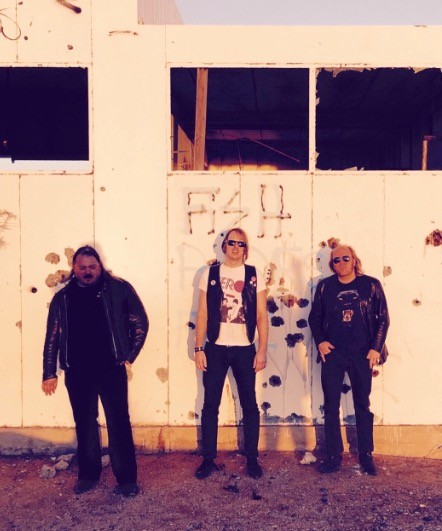 Detroit’s favorite disgusting weirdos have not one but TWO brand new 45s — one of them is so new that it’s out today — and you can come pick them both up when you see the band perform at their record release show at the still-relatively-new (and totally awesome) Hamtramck venue Ant Hall.

If you are somehow still unfamiliar with the mutated rock 'n' roll stylings of mastermind Timmy Vulgar, allow us to fill you in. Under Vulgar’s fantastically freaked out belt are two decades of raucous punk rock, from the early stuff with Epileptix and Clone Defects to Human Eye’s out-there space-punk to the trio that makes up Timmy’s Organism today, where Vulgar is joined by bassist Jeff Giant and drummer Blake Hill.


Timmy’s Organism kinda sounds like a mix of Alice Cooper, Destroy All Monsters, and what crawls out of the sewer when all of humanity has been irradiated by gamma rays produced by the collapse of a superluminous supernova.

But the other thing is that Vulgar and his companions don’t just make music; the live show brushes up against theatrics, with just the right amount of who-knows-what-that-gross-goo-is dripping and slopping all over the stupefied audience. And the music rips! You want some shreds to go along with your goo? Not to worry, Timmy’s Organism assuredly delivers. Vulgar puts it best himself when he says, “Heavy, raw, ugly, slimy guitar music has always been my favorite.”


If that sort of thing has always been your favorite too, you should know by now where you need to be tonight. The band plays the Ant Hall in Hamtramck to celebrate the release of two 45s; Lick Up Your Town / Sweet Tooth, which came out back in January on Florida’s Total Punk Records, and another that is officially out today, Revolution Eyes / Michigan Sun, via the DMT 45 Series on new local label Detroit Magnetic Tape Co., distributed by Lo & Behold! Records & Books, one of our favorite Hamtramck spots run by jack-of-all-trades Richie Wohlfeil.

Each 45 was limited to 500 copies; Lick Up Your Town sold out within 4 days, but the band still has a few left, which will be available at the show. You will definitely want to pick up the new 45 too, which is also limited to 500 copies and will come in a colored sleeve.


Both A-sides (“Lick Up Your Town” and “Revolution Eyes”) are glorious lumps of sickening rock and roll; on the B-sides, we go back in time for one track and get to laugh a little bit with the other. Longtime fans of Vulgar will be glad to know that the Lick Up Your Town B-side, “Sweet Tooth,” is actually an old Reptile Forcefield song he decided to bring back to life. As for the Revolution Eyes B-side, Vulgar describes “Michigan Sun” as a parody of pop songs that California sun.


The band has a full new album recorded and ready to unleash upon the world; the plan is to have it released by the end of the summer. Both A-sides are on this new album, but the B-sides can be found on the 45s only.

Come to the show tonight, grab the new releases, and enjoy the extremely stacked line-up curated by the band. “I just wanted bands I really like in town right now,” Vulgar says — good thing he has some pretty fine taste.


The Ghost Light Bar right next door opens at 7pm, so come early to catch the keyboard punks-who-cover-Can weirdness of the Beauticians, one of Detroit’s newest bands. And absolutely stay for the psychedelic punk of the Deadly Vipers and raw, riffed out garage of Danny and the Darleans. DJ Twin Spin holds down the tunes in-between sets.

Timmy’s Organism plays tonight, Friday, April 21st with the Beauticians, the Deadly Vipers and Danny and the Darleans at the Ant Hall; 2320 Caniff St., Hamtramck; $8; doors at 9pm.