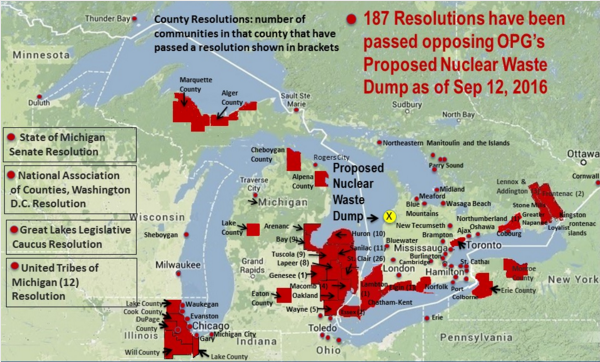 As a poet once said, "April is the cruelest month."

And when it comes to the environment in the Great Lakes region, good news has been few and far between this April. Michigan environmental activists have good reason to feel gloomy, as fracking operations spew flowback on roads in Kalkaska County,  as radioactive waste heads for Wayne County landfills, as hazardous waste processors plan expansions in Detroit, or as speculators consider mining potash in regions rich with underground water, which Nestlé is busy sucking out anyway. It wasn't even a huge news item a couple weeks ago when an unknown amount of hexavalent chromium spilled from a broken pipe at U.S. Steel's plant just off Lake Michigan.

No, good news has been hard to find this April. But there is one bright item: The Canadian government has not approved Ontario Power Generation's plan to dump radioactive waste about a half mile from Lake Huron.

Now isn't that a strange idea? Like, Canada is the second largest country by area in the world, right? And it would seem to abound with scarcely inhabited places. For instance, Nunavut is roughly the size of Western Europe, and has about as many residents as, say, Lincoln Park, Mich. Might there not be a place up in those frozen wastes more appropriate for radioactive waste? Maybe somewhere farther from the source of drinking water for 44 million people?

OPG's plan to turn Kincardine into nuclear waste central has riled governments across the region. And, in a bit of good news, the Canadian government told OPG that the plan simply wasn't good enough to approve right now. This isn't the first time the plan has struck out, although it could be its last, as some commentators point out. In fact, John LaForge of Nukewatch wrote in a piece for CounterPunch this week,

[This rejected permit] amounts to “strike two” against OPG, and the Minister’s refutation was praised by community leaders and watchdogs around the Great Lakes. So far, 187 cities, townships, counties, states and provinces in the Great Lakes Basin have passed resolutions opposing the dump. Columnist Jim Bloch in The Voice asked, “How many swings will the Canadian government give Ontario Power Generation before the firm strikes out in its request to build a nuclear waste dump on the shores of Lake Huron?” The answer may be “no more.”