Live review: Soundgarden's final show at the Fox on Wednesday, May 17 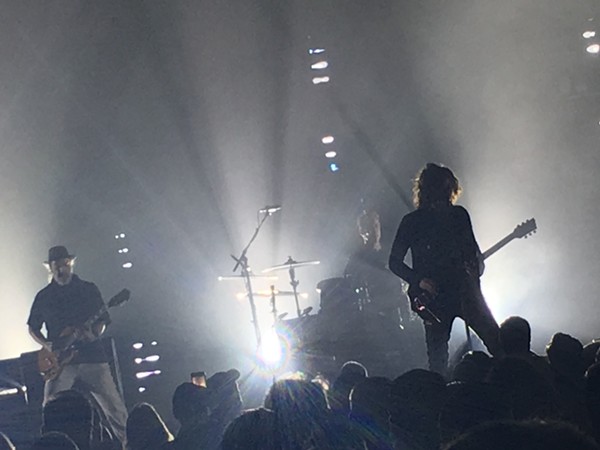 It comes with great shock to say that Chris Cornell, one of the greatest vocalists ever in alternative music, has passed away in Detroit at the age of 52. I must admit that it’s tough to write a show review in light of these tragic circumstances. Of course, Cornell’s final show should be detailed. And fans know that he passed after an incredible show.

During last night’s show at the Fox Theatre, Soundgarden were in top form. One of the last surviving alt-rock greats from the '90s, the group, surprisingly, played hits “Spoonman” and “Black Hole Sun” during the first half of the set. This proper choice led to further experimentation, allowing them to dive further into cuts from their most recent, and now final album, 2012’s ‘King Animal’. While the set was admittedly heavy on classics from Superunknown, jams from Badmotorfinger allowed the band members to pulsate off one another. The two-song encore, comprised of “Rusty Cage” and “Slaves and Bulldozers,” both from the previously mentioned album, was certainly the highest energy portion of the evening, allowing for serious riffage between guitarist Thayil, bassist Shepherd and drummer Cameron. During the latter and final song, Cornell dove into a verse or two of “In My Time Of Dyin',” a poignant and Earth-shattering point in the night, now devastating.

Between several songs, Cornell raved about his admiration for Detroit crowds. “I’ve bragged about Detroit crowds for thirty years!” said Cornell, also mentioning that he had “never been disappointed” with crowds in the city and that shows here were “pretty much all inclusive”. While this sort of crowd rant is displayed at most every show, it could be seen that Cornell truly held Detroit in high regards. Near the end of the show, Cornell riffed “I feel bad for the next city — I’ll say ‘you should’ve been at that Detroit show!,’” a comment which shows that Cornell truly gave his all in Detroit.

After the passing of Cornell, along with those of Cobain, Hoon, Staley and Weiland, Eddie Vedder remains as the sole vocalist in the foundation of the 90s grunge boom. Most sadly of all, future generations won’t be able to hear Cornell’s voice in person; a voice which rings triumphant on records but shone ever so brightly in person. Picking up his guitar and mic stand at the end of “Jesus Christ Pose,” just before the encore, the crowd erupted. Just as it should have been, Cornell left the stage after the encore with the droning feedback still going on. The feedback continued for another few minutes until Thayil left the stage, almost immediately cutting the noise and turning off all the lights, resulting in a deep black. Even after the band had left the stage, the crowd still erupted.