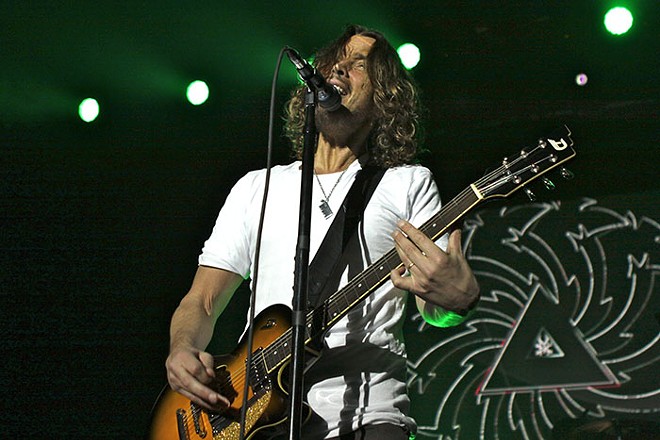 Related Live review: Soundgarden's final show at the Fox on Wednesday, May 17

Chris Cornell, lead singer of Seattle grunge band Soundgarden, died in Detroit  after playing a show at the Fox Theatre on Wednesday night. He was 52.

A representative for the band called the death "sudden and unexpected" and that said the singer’s family would be "working closely with the medical examiner to determine the cause."

According to WDIV, sources say Cornell's wife called a family friend to check on Cornell. The friend then forced open the hotel room at the MGM Grand in Detroit where Cornell was staying and found the singer dead in the bathroom with "something around his neck."

The singer had admitted to previous drug use. In a 1994 Rolling Stone article, he described himself as a "daily drug user at 13." In a 2009 interview with The Guardian, he said he abused OxyContin after Soundgarden disbanded in 1997.

Soundgarden has at least one notable Detroit tie: artist Mark Dancey, who was also guitarist for Sub Pop labelmates Big Chief, designed the cover for the band's 1991 breakthrough, Badmotorfinger.

This space will be updated when more information is available.