A conversation with Wilco's Nels Cline 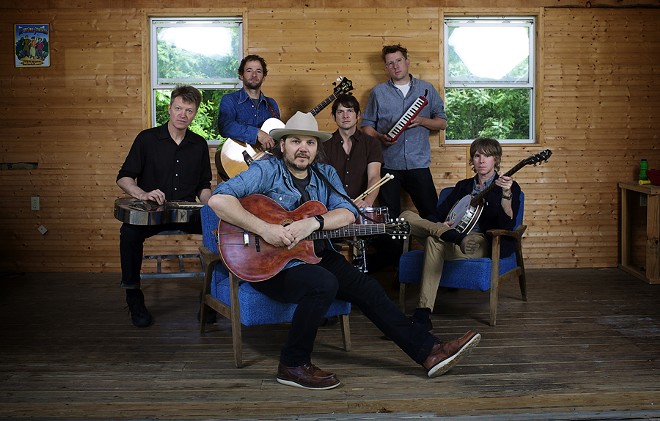 Like most of us, guitarist Nels Cline remembers where he was on election night 2016. Unlike, well, all of us, he had just released Schmilco, his fifth studio record as Wilco's emotively dexterous cultivator of catharsis just two months prior. "We were all together in Europe when that went down," Cline recalls. "It was literally one of the most shell-shocked bus rides of my entire life."

A deceptively self-aware follow-up to 2015's jarring hallucination Star Wars, Schmilco is rather covert in its disparity. Eerily suited for the calm before the storm and the storm itself, Schmilco celebrates a discordant Midwestern marriage of paranoia, mordant religious imagery, and the raw, irrefutable loneliness of youth. The record finds our unlikely guitar hero toggling between spacial atmospheric sensibilities and volcanically exorcised sonic seizures. But it isn't politics or darkness that will serve as fuel for Wilco's upcoming North American tour, quite the contrary.

"I don't think about it in terms of 'here we go into the dark thicket of audacity' you know?" Cline laughs. "We are playing our music together for people who are aware and share in this anger. We have to get through it and music helps us transcend a lot of these anxieties.

"I think we're sharing positivity, not just disseminating it."

Known for his wildly expressive, improvisational performance both in the studio and onstage as much as he's known for his humble personal disposition, Cline admits his exposure to Wilco was pretty minimal before being asked to join the band in 2004. He was 48 years old at the time.

"My earliest memory of Wilco was driving around in Carla Bozulich's (of Geraldine Fibbers) van and at some point in the tour someone bought Yankee Hotel Foxtrot. We spent a lot of time in the van listening to that record."

"I've gone through so many voracious stylistic listening phases." he adds. When asked about early influences Cline reflects on the "timeless architecture" of old Weather Report records and how Neil Young's After the Gold Rush most effectively scored the listlessness of his adolescence, and he notes the profound impact Ralph Towner and Herbie Hancock had on the discovery of his harmonic language. His voice lights up at the sound of memories pushing themselves to the surface, each glance backwards unknowingly paving a step forward. "That's the power of music, isn't it?" he says.

Since joining Wilco, Cline has been named by Rolling Stone as one of the greatest guitarists of all time, a detail Cline is admittedly "willfully ignorant" to. His soaring, chest-opening instrumental punctuation on 2007's "Impossible Germany" may be the most definitive example as to why he's landed himself at the top. Or perhaps it's his innate intuition of when to pull back, when to release and most notably when to let go completely. And it's hard not to be completely hypnotized by his manic dance of convulsions on Kicking Television's version of "Spiders (Kidsmoke)" But it's more than just chaos for Cline.

"I'm a catharsis kind of dude, but I think there's something about playing straightforward rock 'n' roll that has implicit catharsis. It can't be manufactured. I think if we feel that lift then you'll feel it, too," Cline says.

"People seem to think that I brought a lot of chaotic texture to Wilco and while that may be true on a song or two, I think on the last two records it's something that Jeff brings to the table." he explains. "I'm very pleased that he's been able to use his guitar playing style as a very cogent ingredient. We have these sort of wild, splintery moments that he and I create together. The final word on that generally is Jeff's. When Jeff is happy that's where it stays. And I'm cool with that."

How to tackle the set list — what seems like an impossible task for a band, whose timeline spans 20 years and 10 records? "I never know exactly what the set list is going to be from Jeff," he says. But really, they're keeping track. Wilco has anthologized their set lists from the past decade. Hell, if you go to their website you can select a year, see the most played songs from that tour, download the set list for any given show, and you can even request a song for upcoming dates. For Wilco, the experience is a complete thought.

"It's a cool record for sure and I really like it," Cline says of Schmilco. But you'll hear some stuff from all the records. There are certain ritual songs that get played almost every night, but for the most part the rest of the show will flex a little bit. I believe that Jeff has a sense of duty to present a show to that audience that's really well-rounded dynamically."

While Cline may be impartial to defining success and whether or not he feels as though he's achieved it, his impact on Wilco is both heard and felt with an undeniable resonance that Cline is much too modest to agree with. Longevity, stability, and happiness are among the words he uses to describe both the future of Wilco and the road that has lead them here, but it's commitment that will, perhaps, define them.

"I think it's primarily the combination of musical ability, both stylistically in terms of band chemistry, the artistry behind Jeff's words, and how he can basically challenge himself, us, and the audience without feeling like he's abandoned us that has maybe kept this band, these particular six dudes, functional and happy with what we're doing for 13 years," Cline says. "We like surrendering to the music. And I think that's pretty damn interesting."