Because he is a fine multi-disciplinary type artist, and as he is a friend whose first-ever solo art show is called In the Shadow of Your Meow — all very large paintings on wood which feature cats — and it opens tonight at UFO Factory, the other day without warning I threw a barrage of questions over to Warren Defever, whose musical project His Name Is Alive is an exceptional part of Detroit's music heritage. That makes it sound really boring and institutional, but it isn't. HNIA is an ever-changing beast of a musical project, and continues to make better and better sounds all the time.

His Name Is Alive at El Club Friday is your can't-miss show of the week
Whatever you think it sounds like, this is His Name Is Alive’s best record, ever. So how can you miss the release party?
By Mike McGonigal
City Slang

Related His Name is Alive is coming to O'Mara's Irish Pub

Related His Name Is Alive

His Name Is Alive
By Melissa Giannini
The Scene

Defever answered the jumble of questions with humor and aplomb. To give you an idea of what he was up against, here are the questions, followed by his even response. Metro Times: hey so i hear you are an artist now? big fancy artist man. got your own art show there, i see. / so, are you too good for music? / who are your main visual influences? / why cats? / did painting all these cats cause you to get a cat? / are you a horrible cat person now? / ufo factory was originally an art collective/ weirdo hangout/ recording studio in eastern market back before new detroit times — were you making art back then too? you collaborated on works with davin and dion, correct? / what do you guys all call your style? it seems there are some shared elements — "pop" imagery, use of spraypaint, and a fondness for wood — is that fair to say? / why cats? / where are the source images from? / how many 1970s pimps do you think there still are in detroit, anyway? / why cats? / is it hard to paint cats? / what is the hardest thing about painting cats? / did doing this show cause you mental duress, or uplift? / do you dream of cats more or less since starting this series? / when did you paint you first cat? / some of these cats seem a bit... like an invented species — is that fair to say?

Warren Defever: Thanks for all the great questions I'm happy for this opportunity to dispel a few rumors about my work. First, I'd like to point out that I'm not actually the first artist to depict cats — there are recently discovered 10,000 year old cave paintings that feature large cats, so yeah the idea is not wholly original. 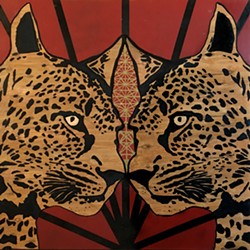 Second, I would like to say yes I've switched over to visual art from music and last year's His Name is Alive album Patterns of Light will be my last, I've been trying to get out of that racket for awhile now and I hope these new works will afford me the opportunity to leave that cursed lifestyle, with its constant composing and never ending hustling, behind.

Finally, the paintings are based on photos and historical drawings so they're realistically drawn, no fake cats, mystical beasts or cryptozoology here, although I do occasionally sharpen the ears into points and elongate the legs slightly, for personal reasons.

The thing about cats is that not only are they fearsome nocturnal predators in the physical world but in the spiritual realm as well, a fact not lost on witches, shamans, sorcerers, drug dealers, poets and pimps who have identified with felines as spiritual warriors with majesty and connectedness to the most powerful natural force throughout the ages.

In The Shadow Of Your Meow is all jaguars, leopards, cheetahs and caracals with human shadows. This is my first solo show but previous group shows have included paintings of servals, savannah cats and vampire deer - and going back to the beta UFO Factory original-art collective-weirdo-hangout-recording-studio in Eastern Market days before New Detroit, I collaborated on an art installation The Silver Piano (with Elliot Bergman and Hitoko Sakai) where we built a hundred electric kalimbas.

As a member of Davin Brainard's Time STEREO crew, I've done tons of installations and performances all over the world, he's been a serious influence and collaborator / mentor for decades now and has provided more help and support hours that can ever be repaid.