Hall of Shame: The first LP I bought turns 35: "Emotions in Motion' 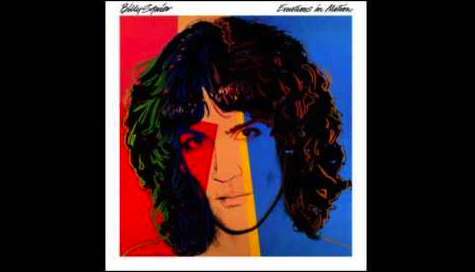 Last week, I realized that it was the 35th anniversary of the first album I ever owned. And my first feeling was one of profound shame that I had bought it at all, let alone that it was my "first LP."

I still remember that shopping trip to Dearborn music in 1982. I was 12. I had had already bought a single or two, but an album seemed a choice worth spending several hours considering. In retrospect, I should have gotten some of the tougher stuff. I looked long and hard at the Dead Kennedys single “Nazi Punks Fuck Off,” and Flipper’s “Get Away” on green vinyl. (To my credit, I later picked up the Flipper disc.)

But I figured I was ready to take the plunge and buy my first LP. Would it be the Alternative Tentacles compilation Let Them Eat Jellybeans? How about Flex Your Head, the Dischord punk comp on yellow vinyl from earlier that year? Man, I could have bought so many things that would be regarded today as super cool.

It probably wouldn't be a big deal if I'd just developed into a typical teen, instead of developing the punk-rock pedigree I later did. Because I’ve been embarrassed about this for the longest time: The first LP I bought was Emotions in Motion by Billy Squier.

In my defense, I’d really enjoyed the hits on Squier's 1981 release, Don’t Say No, which an older sibling owned. Also, I had wanted to make sure the album had at least a few songs I was already familiar with and enjoyed, and the title track and synthy new-waver “Everybody Wants You” had gotten enough radio play for me to be satisfied that I liked them. I decided to bite the bullet and pulled the fake-leather wallet out of the back pocket of my Wrangler jeans and push several rumpled dollar bills across the counter, becoming a Squier buyer.

Over the years, I’ve cringed with embarrassment — both over that decision and the shaggy-banged towhead I was when I made it. For about a year, the LP got a fair amount of use on the family turntable. Shortly afterward, I finally got the courage to stage-dive into hardcore punk rock and set Squier aside. Within a few short years, I wouldn’t even admit to having bought an LP of radio-oriented rock.

It took me years to finally confess that I had bought the album new. Every once in a while, I'd cop to it when the subject of Billy Squier came up at Metro Times' offices. Longtime music editor Brian Smith would bring up the video Squier made for “Rock Me Tonite,” which featured Squier trying — I think, gallantly — to dance. It turned out that “white rockers being unable to dance” was one of Smith’s favorite subjects. All it took was one video showing bad dancing to break the spell an artist had worked so hard to create. (Smith also often insisted Peter Wolf ‘s career was ruined when he tried to dance.)


The Squier video may not be a total disaster, but try to watch it and see if it doesn’t leave you a little nonplussed. He definitely wasn’t a “triple threat.” And few of the typical fans of radio rock of that time were interested in seeing a rock singer “flailing effeminately around a pastel-lit bedroom and writhing on satin sheets.”

Lately, however, I’ve been more willing to re-evaluate Billy Squier. Like many people, I had simply thought of him as generic arena rock, brother to acts like Foreigner or REO Speedwagon. But as I looked into it, I found that, early on, he often worked with musicians that went in interesting directions, such as rock’s most famous replacement guitarist Bruce Kulick, or Jerry Nolan, later of the New York Dolls.

What really surprised me was Squier’s connection to Freddy Mercury and Queen. I learned Squier had wanted Queen lead guitarist Brian May to produce Don't Say No. May was too busy, but tipped Squier off to Reinhold Mack, who’d run the board on Electric Light Orchestra’s Time and produced Queen’s The Game, a great rock album with that synth-heavy title track. Mack probably was the force behind those quirky touches on the Don’t Say No, like the “Song of the Volga Boatmen” cropping up at the three-minute mark on “The Stroke.” Mack also joined Squier for Emotions in Motion, as did Queen members Freddie Mercury and Roger Taylor for backing vocals on the title track. As I listen to several tracks again now, I realize the stomp and glitter of glam wasn’t far behind. And I’d never even realized the cover was by Andy Warhol.

In 1982, the fusion of rock and new wave was still in its pimply adolescence and hasn’t aged very well, but it pointed the way to what was to come in pop and rock, the synth-heavy hits that kept rock’s backbeat and now influence a whole bunch of bands I’m not even going to pretend I know. I just know that sound when I hear it.

So, on one hand, yes, I’m totally embarrassed by my first LP. But, in the fullness of time, and after an afternoon’s worth of research, I realize why I bought the album, and have found a few good things in it.

My only regret? I guess now I’ll have to shell out $50 to get that original yellow vinyl edition of Flex Your Head. If only there were time machines …