Kid Rock and the Confederate flag: a history 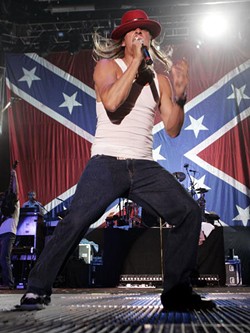 It's been three days since a white supremacist rally in Charlottesville, Virginia turned deadly. Confederate, Nazi, and other white supremacist flags were flown as these self proclaimed "alt right" groups protested the removal of a statue of General Robert E. Lee. A man with ties to neo-Nazi groups, James Alex Fields Jr., drove a car through a crowd and killed peaceful protester Heather Heyer.

Since the horrific events took place, many have taken to social media to press influential figures to denounce the hatred and bigotry shown from these groups. (It took President Donald Trump two days to finally fully denounce the horror that happened by specifically naming white supremacist groups.)

The Detroit Red Wings were quick to issue a statement after images of its logo appeared on riot shields made by one of the alt-right groups. But Detroit political consultant Sam Riddle pointed out an apparent hypocrisy within the organization in that it is allowing one-time Confederate flag-waver Kid Rock to perform a six-day stint at the team's new, publicly funded Little Caesars Arena in September. Riddle and others questioned why Olympia Entertainment is allowing a singer who was once proud to wave a Confederate flag onstage to be the first performer at the arena in a city that is more than 80 percent black.

We took a deep dive into Kid Rock's use of the flag, his relationship with the black community, and the debate whether or not Little Caesars Arena should drop the singer in wake of the Charlottesville tragedy — which he has yet to condemn.

1980s-1990s: Before he was known as Kid Rock, Bob Ritchie is known for leaving his parents home in Romeo, Mich., and learning how to DJ and perform at parties in urban areas like Mount Clemens and parts of Detroit. In an interview with Rolling Stone, Ritchie describes being the only white guy at parties and how different he was for dating and having a child with a black woman.

1998: Kid Rock gets signed to Atlantic Records and releases Devil Without a Cause, a mix of rap, hip-hop, and rock that spawned hits like "Cowboy" and "Bawitdaba." On the album cover, Kid Rock's hair is braided.

2001: Kid Rock releases his fifth studio album, Cocky, and officially makes the switch to country rock. It is around this time that Kid Rock first starts using the Confederate flag on stage.

2002: In an interview with the Detroit Free Press, Kid Rock is asked about his use of the Confederate flag and he defends his use of it as a symbol of Southern rock and rebellion.

2005: Metro Times interviews rapper Brian "Champtown" Harmon, who once DJed for Kid Rock on a tour. Champton tells us "We gave Kid Rock his ghetto pass" when describing his relationship with Kid Rock. In the same article, former MT music editor Brian Smith writes that "Rock and Em are two cultural sponges who swooped in on Detroit ghettos, appropriated black music and its aesthetic, and raced straight past Go to Park Place. So it is, as history has taught us, that it takes whites to popularize black music."

May 2011: Kid Rock receives the Great Expectations Award from Detroit's NAACP at the Cobo Center. A spokesperson for Kid Rock tells the Free Press that getting the award humbled Kid Rock, and he quietly decided to stop displaying the Confederate flag at his shows. At the time, Kid Rock's reps said that he hadn't used the flag on stage in over a year before to the NAACP event. During his speech, Kid Rock says he "never flew the flag with hate in my heart," adding, "I love America, I love Detroit, and I love black people." While the ceremony was going on, protesters outside of Cobo burn Confederate flags.

June 17, 2015: Gunman Dylann Roof walks into the historic Emanuel African Methodist Episcopal Church in Charleston, South Carolina and murders nine black parishioners. Images surfaced on the internet of Roof with Confederate flag images and sparked a national debate on the use of the flag. The flag is removed from the South Caroline capitol in wake of the tragedy.

July 10, 2015: In an email sent to Fox News' Megyn Kelly, Kid Rock writes "Please tell the people who are protesting to kiss my ass/Ask me some questions." That same day, the National Action Network protests Chevrolet for sponsoring Kid Rock's upcoming tour and asked General Motors CEO Mary Barra to meet with the group.

September 2016: During a concert at Fenway Park in Boston, Kid Rock performs the song "Born Free" and said in the middle of the song, "Man, fuck Colin Kaepernick." Kaepernick, a football player for the San Francisco 49ers, made headlines when he silently protested the National Anthem before football games due to what he saw as unfair treatment of people of color in America, especially when it comes to police brutality. At the time, many question Kid Rock's words after he built a career off of black culture.


December 2016: Kid Rock releases a line of pro-Trump T-shirts and hats that many deemed offensive. One shirt shows the map of the electoral college and read that all the red states are "America" and the blue states are "Dumbfuckistan."

January 2017: Kid Rock is photographed with Trump in the Oval Office alongside Sarah Palin and Ted Nugent, who has called for both President Obama and Hilary Clinton to "be tried for treason and hung" and once called for Obama to "suck on my machine gun." It is announced that Kid Rock will be the first performer at Little Caesars Arena in Detroit with a string of six shows.

July 2017: Kid Rock teases a possible run for U.S. Senate. In a music video for a new single called "Po-Dunk," a woman can be seen wearing the Confederate flag (who appears to be pregnant and smoking a cigarette).


August 12, 2017: During the protests at Charlottesville, a white supremacist group based in Michigan called the "Detroit Right Wings" appropriate the Detroit Red Wings' logo on riot shields. The Detroit Red Wings are quick to denounce the use of the logo and planned to take legal action.

August 14, 2017: Political consultant Sam Riddle calls out the Detroit Red Wings for hypocrisy for denouncing the "Detroit Right Wings" but still allowing Kid Rock to be the first performer at the new, tax-payer funded arena: "So the Red Wings will open their new arena in Detroit next month with Kid Rock, a known lover of the Confederate Flag, a hate symbol; now the Wings wonder why and object white supremacists using the Wings logo?"

August 20, 2017: During a concert at the Iowa State Fair, Kid Rock announced to the crowd halfway through his song "Born Free" his distaste for Colin Kaepernick again. Kid Rock said, "Football's about ready to start. You know what? Fuck Colin Kaepernick."


Metro Times emailed Kid Rock's people and Olympia Entertainment for a comment. We have yet to hear back and will update this post when they do.