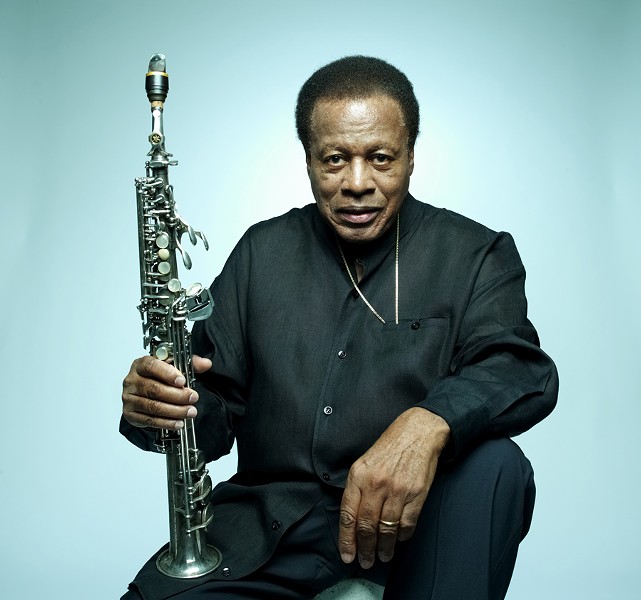 Eighty-four-year-old saxophonist and composer Wayne Shorter speaks in metaphors and movie references. His voice soars up when he wishes to emphasize the point. Especially poignant comments are punctuated with “Know what I mean?” or “You dig?” And the impressions! He does a killer Miles Davis, nailing the trumpeter’s raspy voice, but he’ll surprise you with John Wayne or the sounds of machine gun fire too.

This year, Detroit audiences have the pleasure to experience the enigmatic Shorter — who is artist in residence for the Detroit Jazz Festival’s 38th iteration — perform in three completely different settings. As artist in residence, Shorter has been an ambassador for the festival and supported efforts to enhance opportunities for year-round jazz education. But it all culminates in the performances themselves.

Festival president and artistic director Chris Collins is especially excited to host Shorter this year, a project that has been in the works since his 2012 festival appearance. Collins cites a warmth, openness, and giving quality to Shorter’s engagements, both musically and personally; his contributions not only to Jazz Fest but also the musical world at large have established him as the kind of artist that can really make a difference as artist in residence, in Collins’ words.

Some fans may have been lucky enough to catch Shorter’s performance at the Dirty Dog Jazz Cafe in April. Accompanied by bandmate Danilo Pérez on piano, Shorter displayed a sense of freedom in his playing that arises from not only decades of practice and study but also trust in the path that the music must take. In addition to Pérez, Shorter’s current quartet also includes John Patitucci on bass and Brian Blade on drums; he has been working with this group since 2000, performing his original compositions, many of which date back to the '60s. This group performs Friday night.

A hallmark of the festival is facilitating special artist collaborations, one of which Shorter will take part in on Sunday when he performs with an ensemble featuring Esperanza Spalding, Leo Genovese, and Terri Lyne Carrington. While this is a rare opportunity you won’t want to miss, Monday brings the most expansive sounds yet with the North American debut of his newest work “Emanon.” The Detroit Jazz Festival Orchestra joins Shorter, who happens to be a lifelong science fiction fan, to perform this suite, which is also the score for a graphic novel by award-winning comic book artist Randy DuBurke (The Moon Ring and Malcolm X: A Graphic Biography).

Related 10 acts not to miss at Detroit Jazz Festival

10 acts not to miss at Detroit Jazz Festival
By Ana Gavrilovska
Local Music
Born in Newark, New Jersey, an early love of music would propel Shorter to heights both cultural and sonic. His career reads like a veritable who’s who of jazz: he came up with Art Blakey and the Messengers, eventually becoming the band’s musical director; helped solidify the emerging new sounds of Miles Davis’ Second Great Quintet and frequently composed for Davis; and co-founded pioneering jazz fusion group Weather Report with Davis veteran keyboardist Joe Zawinul. Many of his compositions are now jazz standards, and he has earned widespread acclaim on both tenor and soprano, as well as numerous awards, including 10 Grammys.

As a bandleader, Shorter released many records on Blue Note in the 1960s. Some standouts include the heavily Coltrane-influenced JuJu; the post-bop of Speak No Evil, cited by many as Shorter’s best work; The All Seeing Eye, possibly his most avant-garde album; and Super Nova, a slightly deeper cut on which free jazz guitar master Sonny Sharrock tears it up.

Shorter’s latest album — also a Blue Note release, his first for the label in 43 years — is 2013’s Without a Net, composed of live tracks performed with his current quartet, showcasing not only Shorter’s own vigor but the group’s shared creative energy, as well.

As recently as last year, Shorter was commissioned by the Kennedy Center, Monterey Jazz Festival, Florida State University, and Jazztopad Festival in Poland to compose a piece inspired by new scientific understandings of the Big Bang theory. Called “The Unfolding,” this orchestral suite appears to be the perfect precursor to “Emanon.”

In advance of the festival, Shorter was kind enough to grant us some of his time; the resulting conversation was something of an unfolding itself. I came prepared with many questions about his career, but as we spoke, his remarks jumped from one thought to another. Before I knew it, our 20 minutes were up and I was breathlessly thanking him for his time — on the day of his 84th birthday, no less.

Metro Times: Tell me about your love of science fiction.

MT: Both “The Unfolding” and “Emanon” are associated with science and the cosmos. How are these things connected with music and what is that relationship like for you?

Shorter: We were invited to Stanford University [by astrophysicists in the Galaxy Formation & Cosmology Group]. They invited us there because they wanted to talk about improvisation. They don’t refer to the “Big Bang” as the “Big Bang” anymore — they say that in reality, [it was] an unfolding. They got some data that [shows] before this unfolding became apparent, they see evidence of something called a multiverse. Not just this universe but a multiverse where all the laws in our universe do not apply, which seems to be scary, but adventurous. Because it’s all connected, and if you think it’s not connected, the disconnection is the connection. You dig?

MT: Totally. So would you say that the fear and adventurousness directly relates to improvisation?

Shorter: Improvisation is the challenge of what they call the fear of the unknown, the challenge of venturing into a place where it is totally unscripted, breaking through portals where you have to actually improvise in order to negotiate the unexpected in ways that [are not] the old strategies we used to employ, you know? Strategy and trickery and conditioning. You capture something and condition it to work for you — people capture people. In fact, most people are hijacked from the cradle but some of us, like the turtles, will make it to the sea.

Eventually every entity will visit — I say visit instead of become — this [act of] knowing everything, or the wisdom of enlightenment. [I say] visit it, ‘cause that’s not the arrival. That’s just the start. People think they have failed at something, but there’s a saying that seven failures are more valuable than one success. The so-called failures are teachers.

There’s a [Mark Twain] quote [which opens the movie The Equalizer]. The quote is, “There are two profound moments in existence. One is being born. The other is knowing why.” And there’s something Meryl Streep said, [though] she’s not the first one to say it, Edgar J. Robinson the actor said it too. When they were asked [about taking on] new roles, [if they] put on new faces, new masks… they said, “No. We take them off.”

MT: This is all quite profound.

Shorter: Something might sound profound, but we must challenge this profundity. You gotta challenge it! Marriage is profound, challenge it. It’s a profound adventure and sometimes, if it’s so profound, why don’t you write it down? Like Miles used to say, we’d say something is profound, Miles used to say, “Why don’t you play that?’ In his voice, “Why don’t you just play that?” Or when Katharine Hepburn told Anthony Hopkins, when he was very young [during] his first movie with her, he was having problems acting, and she told him, “Anthony, don’t act.”

Or when Marian Anderson sang at a place a long time ago and my mother was there. People were talking and talking and Marian Anderson stopped. When she stopped, everybody got quiet. She said, “I’m gonna start again.” She started singing, and my mother said, “You couldn’t hear a pin drop until she finished.” That’s what I’m talkin’ about. The word jazz means, to me, I dare you. I dare you to do this.

The corporate mind is the enemy. They are resistant to the artist or the thoughtful, real, intrinsic reasoning or purpose. But just as an airplane needs resistance to take off, you have to find the teaching point in what’s being resisted. See, the function of corporate people who want power and money, their function is to be teachers. They don’t even have to know they’re teaching … that fits with [the notion that] seven failures are greater than one success. The failures are the great teachers. So we will penetrate and take off using the resistance as as an element of lift and thrust, [as] in aeronautics!

When the people at Stanford said we want to talk to you about improvisation, they were speaking about these laws we have in our universe … but when we get to the stuff about the multiverse … if we are being slowly engulfed by these other universes, there could be three of you, or something that’s not gravity but something we can’t even think of, that we would have to acclimate ourselves to in the name of evolving eternally, to become more and more human. That’s what eternity could be, the ultimate adventure of becoming more and more human. And every stretch of that journey is littered with surprise.

Shorter: So that’s what I’m talking about. Now, how to play that? How to act it, how to live it and everything, is gonna be a glorious struggle.

See Wayne Shorter with his quartet Friday at 7 p.m., with a special quintet Sunday at 9:15 p.m., and with the Detroit Jazz Festival Orchestra Monday at 7 p.m. The festival takes place Sept. 1-4 across four stages in Hart Plaza in downtown Detroit; 313-469-6564; detroitjazzfest.org; Admission is free.