Why Detroit hosted the first-ever vinyl industry conference this week 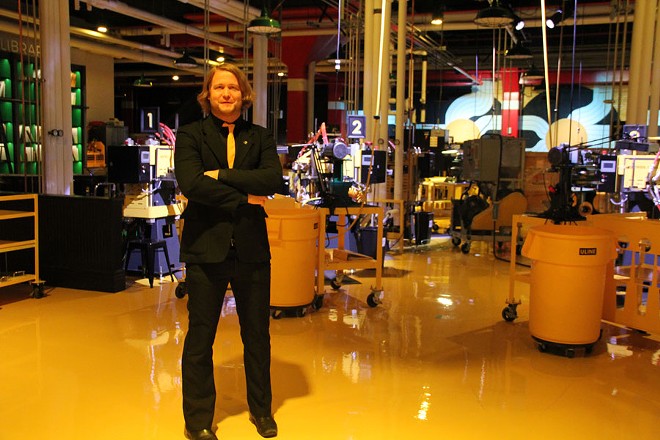 In a world where you can get virtually any song at your fingertips within seconds, vinyl records have somehow managed to survive, and even thrive. In the past 10 years or so, the format made a big comeback.

To celebrate, the industry converged in Motown earlier this week. Colonial Purchasing Co-Op put on its first ever vinyl conference, Making Vinyl, on Monday and Tuesday at the Westin Book Cadillac hotel in Detroit. Organizers said the goal was to bring together key players in the industry to discuss the resurgence of vinyl and “the circumstances leading up to this astounding comeback that took everyone by surprise.”

Although the conference celebrates the “rebirth of vinyl,” Blackwell explains that true music lovers have never needed persuasion when it comes to collecting vinyl.

“Music fans — people for whom music is their life — none of them don’t collect records,” says Blackwell. “I’ve never met a person of that nature who’s like, ‘Yeah man, I’m just streamin.’ There’s so many deficiencies in streaming in regards to catalogue gaps and what’s available and what’s not. That’s the reason I got into vinyl. I wanted to hear Mudhoney B-sides, and those were not on CD. How could I be a fan of Mudhoney and appreciate and absorb their catalogue if I'm just gonna ignore these ten songs that don’t exist anywhere else?”

Blackwell, who has been with Third Man Records since its inception in 2009, also explains why Detroit was the logical host for the conference: it's the only U.S. city with two vinyl record pressing plants.

“People know about Third Man,” he says. “And there’s Archer Pressing here, too. Detroit’s the only city that has two pressing plants... the idea of the continued growth and re-imagination of the city is a story arc that seems to go in tandem with the vinyl story.”

Archer Pressing still makes records the old-fashioned way - on vinyl - in Detroit
A pressing concern
By Brett Callwood
Local Music
Though Third Man Records is famed and credited as a huge part of the vinyl comeback, Blackwell and the city of Detroit have a history with vinyl that goes back even earlier. This history begins with Dave Buick, the founder of Italy Records — the first person to send a record from White's band the White Stripes to press.

In 1997, Buick was running the label out of his basement. “In terms of what the mainstream world considered cool or hip, nobody would have considered that cool at the time,” says Blackwell.

Cool or not, Buick was the first label owner to realize the potential of the White Stripes. “Without Italy Records, we’re not here today,” Blackwell explains. “I legitimately think that if Dave Buick didn’t see the White Stripes at the Gold Dollar and ask them to put out a record, I don’t know if anyone else would have... you don’t have Third Man Records if the White Stripes don’t exist.”

Twenty years later, Blackwell, Buick, and White are still working together — just on a much larger scale. “What we’re doing at Third Man now is just the progression of what Dave [was doing] with Italy Records and Jack with his tape machine in his front room in Southwest Detroit,” he says. “It’s the natural progression from there. We’re doing slightly different things but the idea of focusing on vinyl records and putting out things that we think are interesting and important is still there.”

Blackwell, who founded Cass Records when he was 20, says the knowledge of running an indie label from his bedroom does indeed transfer to selling hundreds of thousands of Jack White records at Third Man. “But making the factory that makes those records... there’s no information from running a record label that helps out there.”

When White told Blackwell he wanted to start a pressing plant, Blackwell was thrown into the hot seat as the resident vinyl expert. Although he previously only worked at Detroit's Archer Pressing for a total of three days, his knowledge of the manufacturing pieces and genuine fascination with the process carried him a long way. In fact, this fascination is what inspired the fish bowl-esque presentation of Third Man Record’s pressing plant in Cass Corridor.

“The process is hypnotizing. To see raw material being transformed into a playable disc, there’s something about it that keeps people fascinated,” he says. “To be able to say, ‘See that record being pressed right now? You can go buy it in the racks’... It’s kind of the best advertisement for why you should buy vinyl records. It’s the secret sauce.”

Is vinyl manufacturing Detroit's latest growth industry?
Still in the groove
By Ana Gavrilovska
Annual Manual
Blackwell’s genuine adoration for music and vinyl is evident in the way his face lights up when talking about either. The vinyl enthusiast seemed optimistic — hell, even close to downright giddy — about the outcome of the conference and the future of the vinyl record industry, in Detroit and beyond.

“It’s about reminding people that this is important, this is sacred,” Blackwell says. “If you love music, this is the way it is meant to be listened to.”