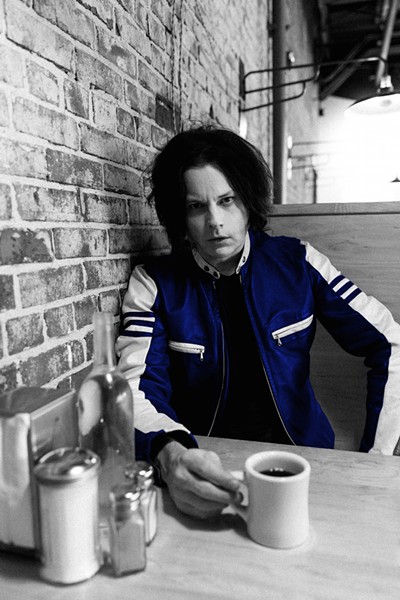 Jack White, Detroit’s electrifying Willy Wonka of rock and ambassador of vinyl, threw us a bone teasing a new solo record during a galvanizing Q&A for the Making Vinyl conference this past Monday, saying that it’s “practically done.” The record would be his third solo venture. “It’s a bizarre one,” he said. “I’ve just got to let it settle. I haven’t been able to listen to it by myself for .”

This has us wondering... if Jack White describes something as “bizarre,” what could that possibly mean? After all, this is the same guy who fronted a band with his ex-wife but marketed their peppermint-colored relationship as brother and sister. And this is the same Jack White who has collaborated with a dizzying assortment of talent, including Insane Clown Posse (covering Mozart), Jimmy Page, Alicia Keys, burlesque queen Tempest Storm, Conan O’Brien, and about a zillion others we're probably forgetting right now.

Why Detroit hosted the first-ever vinyl industry conference this week
By Sara Barron
City Slang
White — an enigmatic showman who has been named one of the greatest guitarists of all time and has a slew of Grammy Awards under his belt — is, for all intents and purposes, pretty fucking bizarre. (And we totally love it.) So, based on White’s last solo-release, 2014’s jutting and ostentatious Lazaretto, what on planet Jack can we expect?

White told actor Gary Oldman in this month's issue of Interview that his recent content makes for “good gardening music or roofing music or, you know, back-alley stabbing music.” Which makes us think that he might exploit this very juxtaposition — to polar extremes.


White showed a softer side this week when he debuted his children's book We're Going To Be Friends at a Barnes & Nobel in NYC. The book, which is inspired by White Stripes lyrics, was published by Third Man Books. Which makes us think he might be aiming for a younger audience... much younger.

It’s possible that the “bizarre” White refers to is simply more of the same. Because if we’ve learned anything about Detroit’s favorite weirdo it’s that he is true to himself… all of his selves. Which would be totally fine with us.