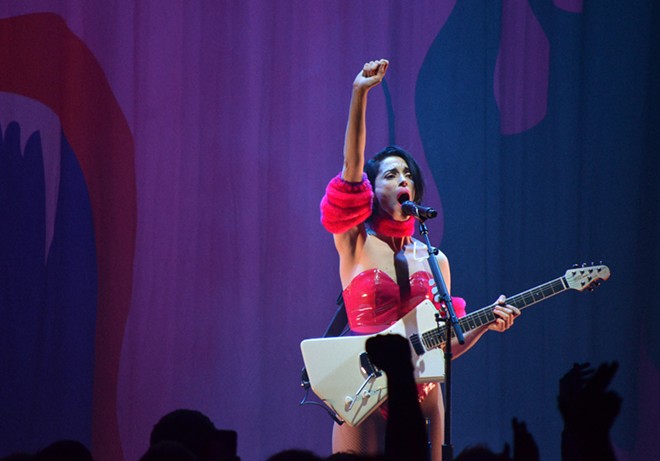 What do you do when the world is ending? You get your ass to a St. Vincent concert and watch it freaking burn.

It should come as no surprise that the artist born Annie Clark found ways to turn a traditional concert into a vanguard, sensory experience that bordered on high art. Clad in a patent leather bodysuit and metallic stiletto booties, Clark mixed equal parts reality and fantasy — a recipe that left the audience in a state of wonderment.

Tuesday night at the Fillmore unfolded like a Tour De St. Vincent — the singer began with her earlier cult-followed works. The set began with a dramatic, moving rendition of “Marry Me,” during which Clark emerged from stage left beneath a sea of theater curtains. Rather than competing for attention with the billowing stage drapes, Clark easily commanded the audience’s attention with her omnipotent vocals.

Throughout the show, Clark remained the sole body on stage, save for one or two masked stage hands who delivered a fresh guitar to the artist before quickly fleeing. The absence of a backing band seemed hardly felt at all. Clark’s a reservoir of magnetizing energy — no additional guitarists necessary.

Halfway through the first half of the set, a giant tapestry of an otherworldly being unfurled behind her, looking as menacing as it did terrified. At this point, Clark lied down on stage, singing “Strange Mercy,” while tempting the maniacal monster to swallow her whole. Of course, it didn’t, because it’s not real, but that was easy to forget in this futuristic funhouse of a show.

After “Strange Mercy,” Clark addressed the audience: “It’s not all gloom and doom. I think, sometimes, we like to dance.” Then she finished out the first half of the set with ripping guitar solos in “Rattlesnake” and “Birth in Reverse.”

The second half of the show was a complete performance of Clark’s newest record, MASSEDUCTION, and this is when the whole thing turned into a futuristic, pop-horror acid trip. Clark emerged in a pointy silver dress with turquoise armbands and a bright yellow guitar, ready to take things to a gloriously weird place. During “Pills,” she mocked the over medicated masses while a giant screen showed her being primped and prodded by a dominatrix-looking production staff for an imaginary media feast.

Each song was accompanied with it’s own neon-colored, dark-themed imagery, all of which starred a visually stunning Clark. That made us wonder: Is Clark mocking the self-obsessed absurdity of this generation or participating in it? Or both? Either way, it was nothing short of genius — not to mention, wildly entertaining.

The show appropriately came to a close with “Smoking Section” during which Clark repeated, “It’s not the end” as an army in morphsuits partook in a yoga/pilates hybrid class behind her. Maybe we’re wrong, but it sure felt like The End to us.