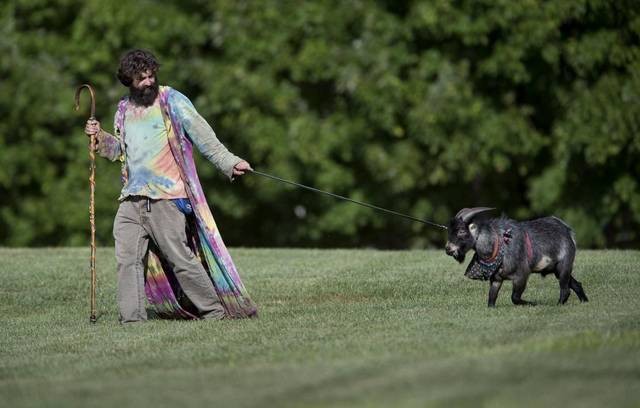 Before Jan. 16, Erick Brown was known to a small following of metro Detroiters as the "goat man," a nickname he earned after adopting a black, horned goat he calls Deer.

Brown, who suffered a head injury as a toddler and has since been considered disabled, lives in a Detroit house he purchased at auction for a little more than $1,000. The home has no heat or running water, but Brown still offers his home to travelers and wanderers — a generous habit that nearly got him killed.

As MLive reported, a transient couple and their dog were staying with Brown back in January. They'd offered to help him fix up his house in exchange for room and board, but when they didn't uphold their end of the bargain, Brown phoned a neighborhood hoping for help kicking them out.

When the couple overheard the conversation, they ordered their dog to attack Brown and began brutally beating him with a cordless drill. They later tied him up, stole his bank cards, and booked it.

The altercation left him with two black eyes, a broken nose, and a cracked tooth — not to mention he was out an ID and whatever amount of money he had in his bank account. Yet Brown, who is known for being intensely optimistic, never spoke too poorly of the couple.

"I've been all across the country and met awesome people and sometimes they have issues, you know? And I guess these people were dealing with a lot of issues in their lives, and for whatever reason, they couldn't get over them," Brown told MLive.

Brown is known for that relentless cheerfulness as much as he is for the goat. In a Detroit Free Press article published today, John Carlisle (formerly known as Detroitblogger John) interviewed several of Brown's family members, friends, and acquaintances who all note that Brown feels it is his life's mission to spread positivity to the world.

And now some metro Detroiters are hoping to return the karmic favor.

A benefit show is planned for Brown at Otus Supply on Sunday, Feb. 18, when Dead Again, Phluffwood, and Wire in the Wood will begin performing at 4 p.m. Tickets are $25-$30 and 100 percent of the door proceeds will go to support Brown's GoFundMe campaign. Additionally, $1 from the "giving tap" will also go toward the campaign.

According to Otus Supply's Kevin Lamb, Dead Again reached out to the venue about holding a benefit show. He says they're hoping to raise $10,000 for Brown.

For more information go to OtusSupply.com