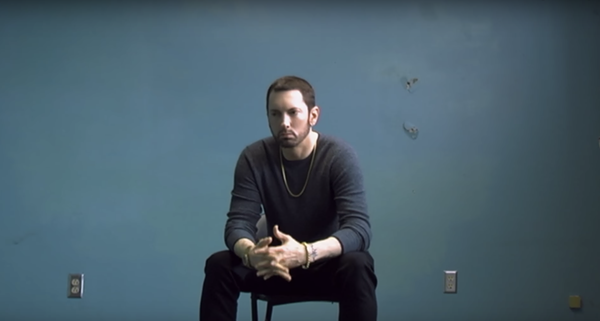 Clocking in at just under seven minutes long, the melodrama of "River" unfolds using a hidden-camera, reality-show confessional format. There is no shortage of night-vision, VHS distortion, Ed Sheeran just, like, singing alone in an abandoned room, and rain — a very subtle baptismal downpour. If the music and visuals weren't enough, "River" offers at least three-plus minutes of dialogue between the fictional non-fiction character Marshall (played by Eminem) and his "one night stand, turned two-night stand" turned unplanned pregnancy and oh my god how is it raining indoors?

Though it is unclear as to where Sheeran's character fits into the serpentining plot, we are thankful he's there to distract us from a world where "Marshall" is training as a boxer AND recording this very song, while, somehow, juggling a relationship, impending fatherhood, and the part where lightning hits his house and explodes everything.

Both a cautionary tale and a -resurrect-early-2000s-music-video-trope, "River" is very wet.