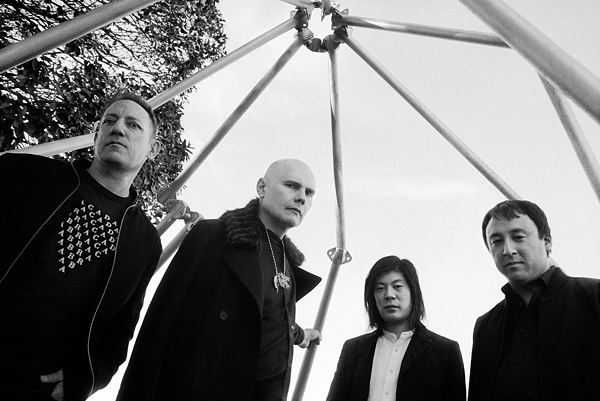 Today is the greatest — not because Smashing Pumpkins are back with a mostly original lineup but because it gives us a reason to Google image search for that time Billy Corgan was super pissed while riding Disneyland’s Thunder Mountain Railroad. Oh, and the time he stopped by Infowars to chat with fellow nutjob Alex Jones and make comparisons between “social justice warriors” and the KKK.

But, the “Shiny And Oh So Bright” tour isn't about that. This morning founding members Billy Corgan, Jimmy Chamberlin, and James Iha announced their first tour since 2000 as the Smashing Pumpkins — the band we wish we still liked. The tour will infect 36-cities and will kick off in Glendale, AZ on July 12. But don’t worry, they’re coming to Little Caesars Arena Sunday, Aug. 5.
The reunion, which coincides with their 30th anniversary, omits founding member and bassist D'Arcy Wretzky from the lineup but will celebrate the band's catalog from inception to 2000.

Tickets go on sale Friday, Feb. 23 at 10 a.m. and will range from $29-$125 and will be made available via 313presents.com, Livenation.com, as well as Fox Theatre and Little Caesars Arena box offices.

Get our top picks for the best events in metro Detroit every Thursday morning. Sign up for our Events Newsletter.