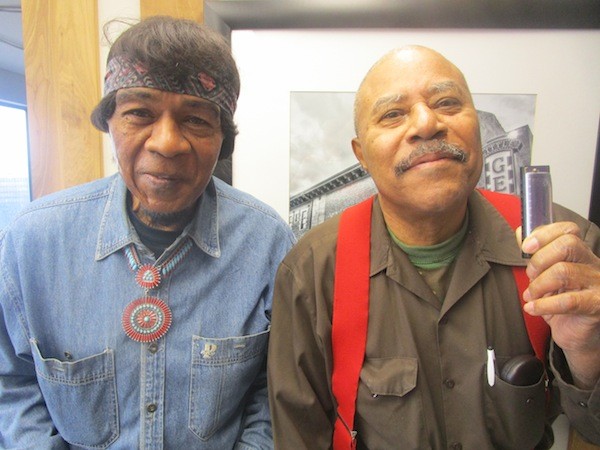 Once upon a time, about 75 years ago, Detroit’s east side sported a hugely influential black section, stretching from the flashy black entertainment district downtown known as “Paradise Valley” up along Hastings and Oakland into the North End and to the east south of Canfield. Fashion and style were highly developed, and local stages booked the hottest entertainment west of Harlem. Due to restrictive covenants, African Americans found it very hard to live anywhere else, and with trainloads of blacks — and whites — arriving from the South every day, drawn by war work, the neighborhood was bursting at the seams.

Those black neighborhoods are almost completely gone now. Hastings Street has become the southbound service drive of I-75. The Detroit Medical Center and housing projects took over the rest of the mid-city area’s east side. Downtown’s glittering entertainment district and the black neighborhood around it are freeway, sports stadiums, and Lafayette Park. In many areas, the street grid has been wiped away. Though the demolition was done in the name of “slum clearance,” the way the neighborhood was wiped completely off the map has left Detroit devoid of many of the black landmarks worth celebrating today. It's something people feel especially keenly during Black History Month.

So imagine our delight when we heard from an organization called Blackbottom Group. To tie in with the month’s theme, they’re sponsoring a discussion on Wednesday featuring some very interesting Detroit musicians who can comment on Detroit’s past.

The discussion will feature Rock 'n' Roll Hall of Famer Billy Davis of Hank Ballard and the Midnighters and world-renowned mouth harpist Harmonica Shah. Davis, who’ll turn 80 this year, arrived in our fair city in 1951. The 72-year-old Shah came a bit later, in 1967. Between them they can offer eye-opening accounts of the past and the Detroiters they’ve known.

For instance, Davis hasn’t only worked closely with a who’s who of Detroit music that ranges from Jackie Wilson to Berry Gordy, but has tales to tell of Jimi Hendrix, James Brown, Sam Cook, Duke Ellington, and even Fidel Castro. Shah spent a decade stuck in Detroit’s factories before picking up his harmonica.

“Seven days, 12 hours a day,” he says now, “I did get stuck. I didn’t know what the hell I got myself into. The foremen were slave drivers. Of course, you’d get fired for knocking your foreman down, and you’d change way you look, then apply for job across street. [laughs] The rent was $9 a week, and I made $300 a week. The life was easy but you worked every damn day. It was like being in a prison working in that damn factory.” After taking 150 medical leaves from Ford, he finally made the leap from assembly line to juke joint in 1977.

“I’ve been all around the world,” Shah says. “Just playing blues. And I learned from Detroit. All these guys in Detroit showed me how. Uncle Jessie, the Butler Twins, 'Yard Dog' Johnny Jones, Willie D. Warren, 'Guitar' Eddie Burns, Little Sonny, I used to watch those guys. They taught me how to play and how to behave.”

Davis started playing out at 16 years old, having been discovered by a piano player who had him accompany him by special arrangement, with Davis playing while still underage at Pete McCluskey’s bar on Buchanan and McKinley. “He’d buy me a Coke and tell me, ‘Sit right here till I call you, then sit right back at this table.’”

Not only can Davis recall Vernor Highway, he can remember an intact Hastings Street, as well as its most decorated policeman, the near-mythic Ben Turpin.

“He was a nice guy,” Davis says of Turpin. “He walked the street with two pearl-handled Colt 45s, just like a cowboy.”

“He’d never change,” Davis says. “Even when he was playing in England, they sent this advance check." Normally, a star as big as Hooker would have deposited the check in a savings account at a downtown bank. Not Hooker, Davis says: "I saw him cashing it at the Rexall Drugs Store at Mount Elliott and Mack.”

These days, many of the clubs Davis played are gone, and even some of the streets he grew up on are swept away. Only a fragment of Maple Street, where he lived as a child, survives. Hooker’s old hood is now almost all urban meadow. All that remains to attest to how busy Hastings Street once was are the thickly planted fire hydrants between Mack and Wilkins on the southbound I-75 service drive. With any luck, however, the talk this Wednesday will offer Shah and Davis a chance to share memories of those long-gone places with other Detroiters, young and old, those who recall the past and those who hunger for it.

The event should begin with a bit of music from Davis and Shah, which will segue into a panel discussion moderated by Michael Imhotep, founder of the African History Network and host of The African History Network Show on 910 AM. Needless to say, guests who may have stories to share about Detroit’s historic black neighborhoods will be encouraged to share their own memories.